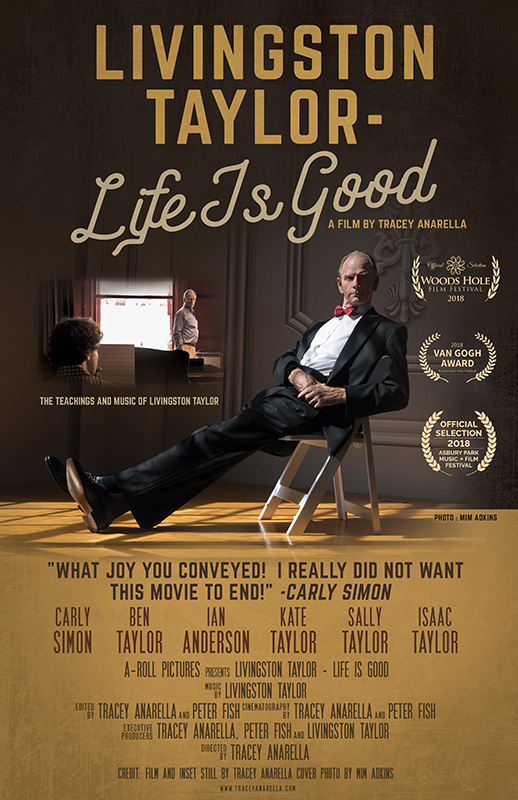 The Martha’s Vineyard Film Center will screen “Livingston Taylor — Life Is Good” on Wednesday, August 22, at 7:30 pm. The screening is a benefit for Vineyard House, a sober-living residence in Vineyard Haven. Livingston Taylor and director Tracey Anarella will attend the screening and lead a discussion after the film.

Livingston is a folk singer, and the younger brother of James Taylor. He celebrated his 50th year as a performer in 2017. He belongs to one of America’s most musical families, which includes Kate Taylor, Hugh Taylor, James, and the late Alex Taylor.

Livingston grew up in North Carolina, and began playing guitar at age 13. He started writing and performing music between ages 16 and 17.

“At 18 I discovered I could hold an audience,” Taylor said. He was 18 when he created his first record. His former sister-in-law, Carly Simon, said, “He is very much his own person.” Livingston was the first member of the Taylor family she met.

Livingston began teaching at Berklee College of Music in Boston in 1989. He teaches a course on performance. In the course, he discusses how panic strikes performers when they worry their music might not be enough. Audience members might think, “How dare you interrupt my life?” To that, Livingston said, “You go onstage not to be seen, but to see.” Livingstone published his book “Stage Performance” in 2000. Teaching is an important part of the artist’s life.

Director Anarella inserts interviews with Livingston’s students, as well as members of his extended family. One student called him the best teacher she ever had. Although James is not interviewed, Livingston talks about their friendship, and says their bond is strong. “As a brother, you’ve got to find a space for yourself,” he said. Livingston is happy to be able to walk to the grocery store by himself — something his brother can’t do. Livingston’s commitment to music has meant giving up some important things, like fathering children.

The film includes many of the singer’s most popular songs. His Top 40 hits include “I Will Be in Love with You,” “I’ll Come Running,” “I Can Dream of You” and “Boatman.” He describes some of his other interests. He flies his 1964 single-engine Cessna 205 airplane between Boston and the Vineyard, and rides a BMW motorcycle with a sidecar. “My brain works in very mechanical ways,” Livingston said, describing these hobbies as similar to playing music. He has a fondness for water, and created a “water world” at his home. The first annual Livingston Taylor Retreat will take place at Boston University from August 17 to 19. Livingston will perform an acoustic set of music after the film and discussion.

Why is this news? And, looking at the car, there’s plenty of room for her to back out. Problem solved. I back out of a tight space like that every day. And just because someone said he used racist language, doesn’t make it a fact. People lie on all sides every day. I wonder what the other party’s language was, maybe that’s why the video won’t be released? Anything’s possible.