Yellow jackets are making their seasonal appearance in gardens. The UMass Garden Calendar reminds us that swatting one releases chemicals that signal more yellow jackets to attack.

2018’s 157th fair has come and gone, in a year of transitions for the M.V. Agricultural Society. The word is that a wonderful fair was enjoyed by many, many fairgoers, setting attendance records! Now is the time to look ahead and make plans for how you can participate in the 2019 fair.

Domestic landscapes have the capacity to be so much more than “the yard.” The term evokes a barnyard, or maybe parking for cars. It has been observed that when Americans speak of the garden they mean the vegetable garden, not “the yard.” “The yard” is a somewhat deprecating way, even belittling, to speak of something that absorbs attention, creativity, and energy in such quantity, and of so many gardeners.

I like to use the term “the garden” inclusively: vegetable or ornamental, meaning any part of one’s premises where one plants and grows. Some gardens are restricted to balconies, windowsills, and containers. Others comprise extensive properties. They all capture the effort and attention of their creators.

Food security can lead to food insecurity. It is said that the arrival of the potato on European shores was the spark that eventually ignited the Irish Famine (1845-1852). Although an oversimplification, potatoes allowed landowners to make peasants responsible for producing their own food. The independent means to feed families led to population increase. Widespread potato cropping advantaged the Phytophthora infestans blight. When the bottom fell out through crop failure, although Irish plantations were simultaneously exporting food to Great Britain, millions starved or emigrated during that woeful time.

Potatoes and beans do not constitute what is considered food security, or a well-rounded diet, nowadays, but most households can benefit from growing some of each. We have both bush and pole beans in our garden, the former for marathons of blanching and freezing, the latter for picking and fresh cooking of individual dishes. I love the way the bean vines drape themselves over the supports — structures that are like wings on a stage set, flanking the center grass aisle — the beans dangling under the beautiful trifid leaf clusters, and small bumblebees furrowing flower after flower.

However, it is the brassicas that star in the fall vegetable garden, including kohlrabi, cauliflower, kales, and Brussels sprouts. In domesticated usage many of these brassicas do not flower, and so are not especially critical to pollinator populations, which gradually dwindle as temperatures drop; but the commercial crops’ production is pesticide-intensive.

Our garden currently contains lots of green and red cabbage. Cooling temperatures abet brassicas’ growth; and some, such as mustard and broccoli raab (also known as rapini, or Chinese broccoli) are really quick crops too, as little as 45 days.

The broccoli raab seeds I sowed are known in Italy as “broccoli asparago,” asparagus broccoli, and are perfect for stir-fries. The tender stems are an essential part of the vegetable, and are harvested just before the flowers open. They are planted four to eight inches apart in rows 18 inches apart, and like light, well-drained loam. Best performance is when plants are not permitted to dry out.

There is still time to sow buckwheat as a quick cover crop for soil conditioning. I am preparing next year’s potato patch in advance by putting down organic soil food, henhouse litter, and straw. Garlic too is a fall crop, in a prepared bed, with the planting timed not too early and not too late, to enable the seed garlic to form roots but not to sprout.

Lifting and dividing is a major, energy-intensive component of late summer and early fall gardening. For one’s back, the work demonstrates the value of having loose, workable soil rich in organic matter, which many garden plants also appreciate.

Many perennials will have grown too large for their space, or, like Shasta daisies and Siberian irises, grown empty centers. Or you the gardener may decide the arrangement could be improved. In the ideal, well-managed bed, a layer of mulch is laid down after all the dividing and replanting has been accomplished.

Cut the plants back and dig with a spading fork, and section into pieces, like a pie, using a spade, an old saw, or serrated knife. Dig new planting holes and loosen the soil. Settle the clumps comfortably in their new locations, or share with friends and neighbors, and water in well. (For smooth establishment, time the operation after a soaking rain.)

Bearded irises and peonies are two families of perennials that are usually divided now, but phlox and daylilies also respond with more flowers and healthy foliage the following season. Order fall-planted bulbs.

With the season’s heat and drought, crabgrass has had a field day, and many lawns need attention. The bluegrass lawn is a fond dream of many, but quite impractical for the location of Martha’s Vineyard. If you are really serious about having the best lawn possible for your location, how much to lime, fertilize, etc., send a soil sample in to the UMass Soil and Plant Nutrient Testing Laboratory, or an other testing lab, to answer these questions with data rather than guesswork.

Buy quality seed that is adapted to your conditions and type of lawn, raking it in to make good soil contact. At variance with some lawn services’ practice, in my opinion white clover is one of the best components for Island lawns, tolerating drought and resisting erosion.

Many Island lawns show significant benefit from a thin top-dressing of screened compost in fall, available by the yard from several Island sources. Compaction in some cases may be remedied with an application of gypsum. 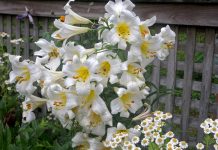 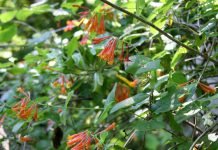 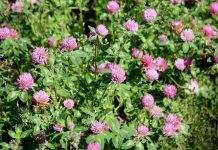