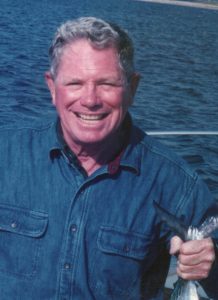 Chuck was a force of nature, inhaling life fully. He was extremely active, competitive, caring, and devoted to improving himself and whatever he worked on. His successful father and older siblings inspired him to excel at everything he did.

Educated at Deerfield Academy, he went on to Williams College, where he majored in chemistry, played baseball, squash, and hockey, and was a cheerleader and head of the Christian Association. His teasing friends voted him not “Most Handsome,” rather “Thinks He Is.”

In 1948 he joined S.D. Warren paper company, telling his father he liked trees. He loved the paper business because of the full cycle from sustainable forests to paper to printing to beautiful books and art. He worked with a unique and wonderful set of colleagues. Chuck started as an apprentice in the mill, then went on to sales, and finally became president. He was promoted the very same day that his classmates at the Harvard Business School Advanced Management Program chose him as their president, as well.

After 33 years at S.D. Warren, he was hired as president of SCA Services, the third largest waste management company in the U.S. Next he became Babson College’s first executive-in-residence and full professor, lecturing on the mission of management. Babson honored him with a doctorate. He finished his business career as head of the appliance division of Raytheon.

Chuck was a motivator and mentor for family, friends, business associates, and nonprofits for which he worked. He could be tough, but it was tough love. He endowed scholarships at Williams College and the University of Maine, Orono. He was a great public speaker. He was full of quotes. One of his favorites is inscribed on stone pillars at Williams College, “Climb high, climb far, your goal the sky, your aim the star.”

He served on nine corporate boards, including the Boston Co., Mass Financial Services, New England Deaconess, and Mohawk Paper. On the nonprofit side, he served on the Corporation of the Woods Hole Oceanographic Institution, the National Board of the Smithsonian, A Better Chance, and others. He supported many local causes, including donating the cow weathervane atop the West Tisbury Agricultural Hall.

Chuck loved the outdoors, the environment, and environmental causes. When president of S.D. Warren, the company received more environmental awards than any other paper company. On Martha’s Vineyard in 1975, serving as president of the Seven Gates Farm Corp., and working with the board, he was instrumental in bringing in The Trustees of Reservations to preserve 1,100 acres of ponds, fields, woodland, and wetland, including two miles of shoreline. He supported friends in Maine on the International Appalachian Trail extension into northern Maine, Canada, and across to Europe.

Upon retiring, he changed his business card to “Chuck Schmidt — Sport.” The family counted 17 sports he had played. His highest level was as a semiprofessional ice hockey player. He had a passion for fly fishing. He was a lover of poetry, photography, motorcycles, animals, Volkswagens, books, singing, playing the harmonica, and decoys, to name a few.

As always, there were Chuck’s many adventures. Bungee jumping in New Zealand (at age 75!), a transatlantic race from Newport to Cork, Ireland, sailing in Croatia and the Caribbean, safari in Botswana and Zimbabwe, hiking out West, cross-country ski marathons in Switzerland, and running the NYC Marathon. One adventure he did turn down was when his good friend Woody Sayre asked him to join an expedition to climb Mount Everest.

Peace at last for a man so beloved by so many. Fond memories from all who knew him; his strong handshakes, his huge smile and hugs, always three kisses, sound advice, love for everyone about him and the pets as well.

Thanks to all the wonderful caretakers through his multiple adventures with health issues.

A church service will be held at 2 pm on Saturday, Nov. 3, at the First Congregational Church of West Tisbury, with a reception following at the Schmidts’ home.