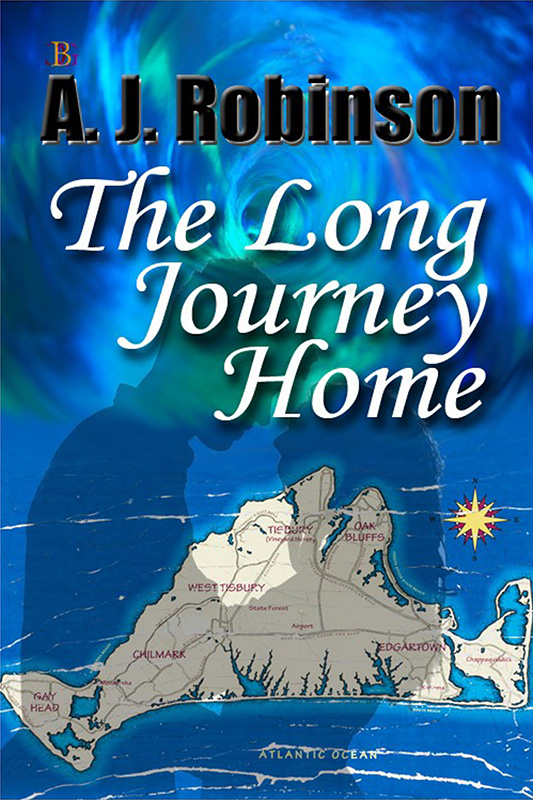 Most of us walk around the Vineyard largely immune to the many physical remnants of our colonial past, but in Andrew J. Robinson’s book, “The Long Way Home,” we are promptly ripped from our 21st century lives and plopped down in colonial Martha’s Vineyard. We follow two modern-day protagonists, a young couple who travel through a portal back in time and try to navigate a world largely unknown and challenging for them, even if the natural landscape is much the same.

Robinson explained why he chose to locate his story both in the Vineyard and during Revolutionary times.

“I wanted the story in an era that had conflict — a war/battle that I could draw on for my framing story that would provide a number of elements,” he said. “First, there would be that sense of dread and foreboding that something bad was on the horizon, and that war was pretty much the only thing that could work. I wanted a war that would bring actual violence to my setting. Second, I wanted my characters to act to prevent, or at least mitigate, that act.”

Even if you are familiar with Martha’s Vineyard’s colonial history, there’s likely something new to learn. Protagonist Art is a Mayhew descendent, which provides an inside view of the Island’s most prestigious family. Art is clearly in love with his girlfriend Hazel, but she in the beginning puts the brakes on their physical intimacy. One thing that keeps him in her good graces is his ingenuity in rigging up solutions to historical “inconveniences” such as a tub with running hot water, toilets rather than bedpans, a precursor of a clothes washer, and a none-too-pleasant-sounding toothpaste substitute. (Suffice it to say it includes mud.) However, not everything is conquerable. Art’s concern for what he knows will become an endangered species makes his reaction to his mandatory partaking in a whale hunt an interesting web of uncomfortable, contradictory emotions.

Hazel has the indomitable spirit of a 21st century liberated woman. Positioning her thus sets the stage for all sorts of tension when her innate modern moral outrage for the way women, children, the Wampanoag, and other non–white men of privilege were treated goes against societal norms. You will have to read the book to see where and how she compromises while remaining true to herself.

Robinson’s talked about his overall aims for his tale. “I wanted to truly immerse the reader in the era and the culture of the Island. It is, after all, the place I love most in the world, and so I wanted to share that,” Robinson said. “I also wanted to show the culture shock that both Art and Hazel, but most especially Hazel, has to deal with in that era. I wanted the reader to see her taking on all the challenges that living in that era presented, tackling them one by one, and seeing how she resolved them. As the father of a girl, most of my stories revolve around a strong female. There were also some of the harsh realities of that era that I wanted to portray: the arranged marriages, the treatment of orphans and children in general, how women were treated, and then the lack of understanding for a boy dealing with autism, which is something I personally am familiar with.”

Robinson squeezes a lot of Vineyard flavor into his 191-page story, which takes us through the 18th century landscape from one town or area to another, some already having familiar landmarks and others not yet there. Delightfully, he weaves in lots of fun colonial colloquialisms that because Hazel and Art don’t know them and need them explained, we learn them as well. Want to take a guess at “sluice your gob?” (Hint: It has to do with drinking beer that Robinson deems a “vile concoction.”)

Because Robinson includes so much specificity about people, places, and things throughout the book, I wanted to know what kind of research he undertook.

“First, I found a number of books on the history of the Island, which I read and used as source material for the events I portray. Some were so old that I couldn’t get an actual print. I had to download a PDF. Second, my dear brother Stephen gave me a set of books about the Island many years ago for my birthday, and they contained the Moshup legends and data on the events on the Island during that era: the Liberty Pole, the deaf community, etc. It’s part of the reason the book is dedicated to him,” Robinson explained. “The colonial slang and other aspects of life in that era came from plain old Google searches that yielded websites with that information. The family names I use are real, but not individual people — all of them are fictional.”

Ultimately, the care Robinson has taken in locating the tale so very specifically in the Vineyard we recognize, underscores his wish that “my love of the Island is what truly shines through in my book.”