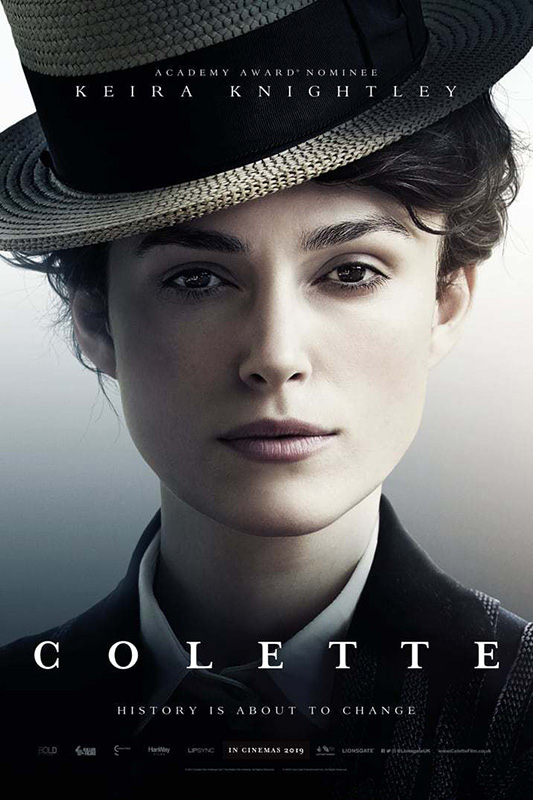 Born Sidonie-Gabrielle Colette in 1873, the novelist wrote 80 books and was nominated for a Nobel Prize in 1948. Best known for “Gigi,” she is considered to be one of France’s greatest writers.

Directed by Wash Westmoreland, the movie opens in 1892, as Colette, known then as Gabrielle, meets her future husband, Henry Gauthier-Villars, who goes by the pen name Willy (West). A country girl from Burgundy, she is dazzled by the cosmopolitan Willy, and once they marry, she moves to Paris with him. The era is the post–Franco-Prussian War Belle Epoque, when Paris was thriving economically and celebrated as a center for the arts. Willy introduces his wife to the sophisticated world of high society in Paris. He is a successful author and publisher who relies on ghostwriters, but also a philanderer and gambler, as Colette soon discovers. His bad habits keep them close to bankruptcy.

While the film portrays Colette’s growing independence as a writer, it also develops her gender-bending sexual liberation. Willy encourages her to develop a lesbian relationship with an American heiress, Georgie (Eleanor Tomlinson), at the same time he carries on an affair with her. Colette’s next liaison is with Missy (Denise Gough). This noblewoman dresses as a man, and considering the era, makes transgender as well as cross-dressing innuendos. As Colette moves into uncharted sexual territory, she distances herself from Willy.

Increasingly determined to produce work using her own name, Colette stops writing under Willy’s and starts performing onstage, with Missy in tow. Then she publishes “The Vagabond,” her first novel under her own name. The film ends with shots of the real Colette and her paramour Missy. Along the way there are nods to current times — a scene where Willy performs a rap riff, and another showing Colette reading a graphic volume.

Although Colette produced many more novels under her own name than the Claudine series, the director focuses on her emergent independence as a writer with a liberated sexuality. She married two more times, birthed a daughter, and seduced her stepson. The film is reminiscent of another recent one, “The Wife,” also about a woman who writes for her husband rather than under her own name. Knightley’s depiction is powerful, as well as West’s. To a degree, her portrait is so strong Knightley doesn’t seem to lack confidence, as a young country girl would have. It is interesting that Westmoreland spends more time showing his subject living under Willy’s thumb than her subsequently liberated life as a successful writer on her own terms.

Information and tickets for “Colette,” as well as other films playing at the Film Center, the Capawock and the Strand, are available at mvfilmsociety.com.

A weekend of ‘Truth and Joy’