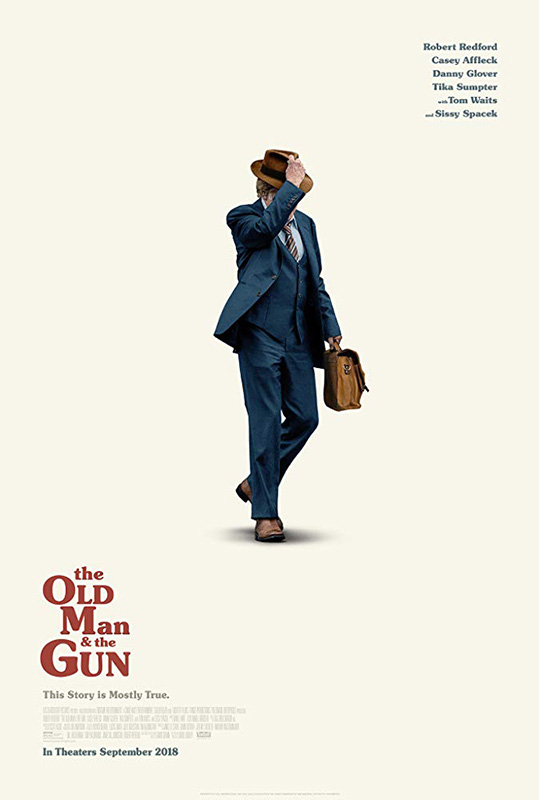 In what Robert Redford says will be his final film before retiring, “The Old Man and the Gun” tells the story of Forrest Tucker, based on a real-life bank robber. The film screens at the Martha’s Vineyard Film Center on Friday, Oct. 26 at 7:30 pm. The iconic film star couldn’t have picked a better way to say goodbye to acting, and I’d say there’s a good chance he’ll earn a Best Actor Oscar nomination.

Redford’s role as Forrest Tucker follows a long line of the 82-year-old actor’s signature roles: “The Sting,” “Butch Cassidy and the Sundance Kid,” and “The Chase.” Director David Lowery adapted journalist David Grann’s 2003 New Yorker article about one of the most notorious bank robbers of the 1970s and 1980s.

Dressed handsomely in a suit, Tucker enters banks without a loaded gun, and uses lines like, “I’d like to open an account.” The tellers he robs are awed by the affable crook. The director recreates the world of the era using grainy film stock, enhanced by music from the likes of the Kinks and Simon & Garfunkel.

Tucker began his criminal career at age 15, and went on to execute 80 heists, breaking out of every prison where he was confined. His most famous escape came from San Quentin Prison in California. Lowery includes clips from vintage Redford films, and focuses more on his portrait of Tucker than on his heists. The film begins in the early 1960s, then shifts to Tucker’s 1981 arrest at age 76.

Casey Affleck plays long-haired John Hunt, the detective who pursues Tucker with a growing appreciation for his bank-robbing skills. The supporting cast also includes Danny Glover as Teddy, who drives the getaway car, and Tom Waits as Waller, the lookout in what’s known as the “over-the-hill gang.” One sardonic line by Waller is his story about why he hates Christmas. Actor Sissy Spacek plays the widow Jewel who carries on a flirtation with Tucker, even becoming his accomplice in one case. Elisabeth Moss puts in a cameo as Tucker’s daughter Dorothy.

The robber’s career in “The Old Man and the Gun” is more about his skill and enjoyment for what he does best than about the money he acquires. “Looking sharp will take you a long way,” he said. Redford evokes his reputation as the charming bad boy he plays in all his best films.

Redford may not be familiar to millennials, but rest assured all viewers will savor watching this legendary superstar perform.

For more information and ticketing for this and other Film Center and Capawock theater films, visit mvfilmsociety.com.