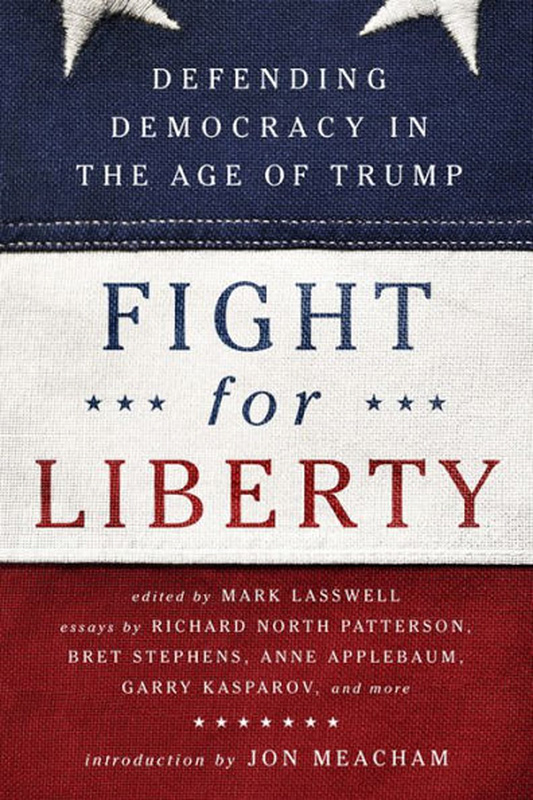 Fans of the Margaret Atwood book–turned–hit television series “The Handmaid’s Tale” will have a lot to relate to within the pages of “Fight for Liberty.”

Published by the Renew Democracy Initiative, a consortium of political heavyweights, the roughly 300-page volume pulls together essays from a star-studded cast of authors, editors, commentators, journalists, even heads of state, to make one resounding plea: Stand up for the liberal values upon which free societies are founded.

From Martha’s Vineyard’s own Richard North Patterson, Securities and Exchange Commission liaison to the Watergate special prosecutor and bestselling author, to Garry Kasparov, the Russian chess champion turned democracy advocate, to former “Nightline” host Ted Koppel — the voices are familiar but fresh. And the topics they explore are handled with a deftness and texture richer than one might expect from a cohesive battle cry.

Yes, the age of Donald Trump, social media, and sound-bite journalism is decried and disdained, yet the pages in this collection drill further. Patterson’s coda — appropriately positioned toward the back of the book — is a meditation on “The Qualities of Leadership,” and dares to push back on populism. “Far more than assertiveness or an instinct for the popular pulse, leaders require qualities of mind, character, and spirit that enable them to advance and exemplify an ideal that, however imperfectly, represents humankind’s greatest potential and its highest aspirations.” (He doesn’t miss the chance to take a potshot at Trump, however, likening him to a “distorted image in a funhouse mirror.”)

Bret Stephens, Patterson’s compatriot and a Pulitzer prizewinner himself, follows with a consideration of “Interests Versus Values,” and asks a penetrating question: “To what extent should the conduct of American foreign policy be informed by the nation’s moral and political values?”

The panoply of voices is like a pleasant parade. With over 30 short (and digestible) pieces, we hear from former U.S. Secretary of Defense William Perry about “Apocalypse in a Nuclear Warhead,” and how scarily close we are to that precipice once again. We are greeted by another member of the Pulitzer club, Anne Applebaum, who brings us up-close and personal with the terrible brilliance of Vladimir Putin and his preferred weapon of mass distraction, a.k.a. “hybrid warfare.”

The chess maestro Kasparov has a few moves left in his arsenal, firing off “The Anti-Democratic Contagion,” a first-person account of Russia’s flawed and failed democratic experiment. “The global spread of democracy once seemed unstoppable,” Kasparov laments, and in this book he bends a willing ear. A handful of the essays echo this sentiment, along with Ronald Reagan’s prophetic words: “Freedom is never more than one generation away from extinction.”

There seems to be a concern at work here; a real concern that in the age of Trump and the concomitant rise of autocracies worldwide, the aforementioned democratic experiment may truly be coming to an end. Millennials, we are told, scored around 30 percent when asked if it was important to them to “live in a democracy,” as compared with 72 percent for those born before World War II. Forty-three percent of older Americans don’t believe it is legitimate for the military to take over the government if necessary; it’s only 19 percent among the younger set.

What is lurking beneath the American surface? What are the geological forces that are causing a tectonic shift right before our eyes? Former Senator Joseph Lieberman weighs in with “The Islamist Extremism Challenge for Liberal Democracies,” laying some of the blame at the feet of zealots. But Rabbi Lord Jonathan Sacks is quick to rebut in “Revitalizing the Freedom of Religion.” “Immigration for the Twenty-First Century” is argued for by Linda Chavez, and Minxin Pei cautions us not to forget “The Rise of Statist Great Power: China.”

It is this complex interplay — almost a conversation between the essays themselves — that is a pleasure to listen in on. Sure, there is a common rallying bell, and the subtext of each essay is the same: Take up the cause yet again; but the whole emerges as less of a one-trick pony and more of a colorful carousel.

In Atwood’s now immortalized dystopian thriller, the flow of political will has truly been reversed. The U.S. has been overrun by a zealous government bent on cleaning up immorality, “gender traitors,” and all and any dissent. The remnants of America exist in enclaves within the neighbor to the north (Canada) and any mention of the time “before” is forbidden.

There is a subtle (or not so subtle) prophecy that underlies these essays — the prophecy that such a turn of events is not only possible but probable if liberty is not defended now. Is this truly the fate of things to come? If we don’t stand up and “fight for liberty,” the text suggests, our greatest fears may be realized. The good news is these authors, and many of their devotees, will not go quietly into that good night.

“Fight for Liberty: Defending Democracy in the Age of Trump” by Mark Lasswell (editor), Jon Meacham (introduction). Available at Bunch of Grapes Bookstore, Vineyard Haven, and online at amazon.com.