Don Macdonald died at Massachusetts General Hospital in Boston on Nov. 6, 2018, as a result of a stroke he suffered on Oct. 24. 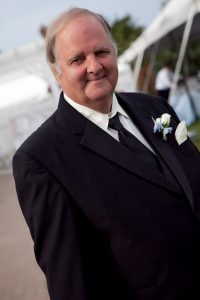 Donald Earle Sherburne was born in Woburn on Feb. 16, 1943, to Ginnie Farnham and Earle Sherburne. In 1950, Don moved to Martha’s Vineyard with his mother and younger brother, Jon. While on the island, Ginnie met and married Herb Combra Sr. Don adopted his stepfather’s last name, and was known as Don Combra through his high school years. Don was proud of the fact that he was a member of the first class to graduate from MVRHS. Following Herb’s death, Ginnie met and married Gil Macdonald, and Don again adopted his stepfather’s name.

After high school, Don enlisted in the Air Force, where he was stationed in Nebraska as member of the 818th Transport Squadron. After returning from Nebraska, Don attended Vesper George School of Art in Boston, where he met Betsy McKie. Don and Betsy both transferred to Southeastern Massachusetts University in South Dartmouth, graduating with a B.A. in art education.

Don and Betsy married in Winsted, Conn., on Sept. 7, 1969. Don and Betsy made their home on the Island in a house Don built himself. On the Island, they operated a variety of businesses, including a pet shop called the Glass Menagerie on Circuit Avenue, a store at the airport called Taj, where Don sold items he had made, and the Scrimshander in Edgartown, which he and Betsy ran for 33 years. Don was a talented scrimshander, and created many amazing pieces of scrimshaw over the years.

Don is survived by his beloved wife Betsy and his two sons, Chris and Jared Macdonald, whom he was very proud of and loved dearly. His wife and sons would tell you he had a stubborn streak, but he was a good man and worked hard all his life. Chris’ wife Emily and Jared’s wife Elise were two of Don’s favorite people, and brought out Don’s reasonable side. He is also survived by his two grandchildren, Cooper and Daphne Macdonald, who were the highlight of his retirement years, his younger brother Jon Macdonald and wife Julie, nieces Sheri Alcorn, Ginnie Chapman, Sarah Noda, Rebecca Topiz, nephew Jon Macdonald Jr. and many great-nieces and -nephews.

His graveside service will be on Saturday, Nov. 10, at 11 am in the West Tisbury Cemetery, State Road, West Tisbury, with military honors provided by the veterans of Martha’s Vineyard.