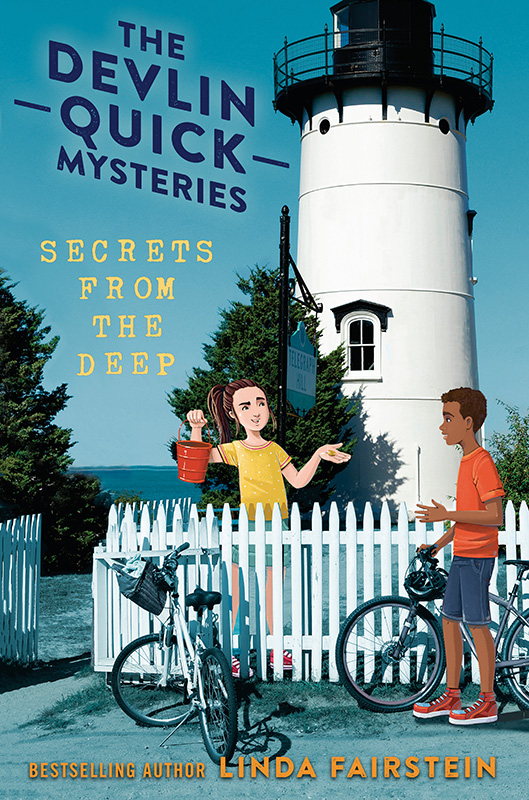 I hope someone is compiling a list of books that are set on Martha’s Vineyard. If you happen to be that person, please add Linda Fairstein’s newest offering for middle-grade readers to the list. “Secrets from the Deep” is the third of the “Devlin Quick Mysteries,” and readers will no doubt delight in mentions of Illumination Night, the Flying Horses, Mad Martha’s, Larsen’s Fish Market, Fat Ronnie’s, and the Game Room, to name just a few of the many Vineyard references. An illustration of the East Chop Lighthouse, along with the Telegraph Hill sign, is on the book’s cover.

Fairstein, a bestselling mystery novelist and seasonal Vineyard resident, has in the past two years established herself as a popular voice for younger readers. “I wanted to write something for middle-grade readers with a strong girl character,” Fairstein said in a recent phone interview. Formerly a prosecutor in the Manhattan District Attorney’s office and the head of the sex crimes unit (known to TV viewers as SVU), it’s not surprising when she says that she loved reading Nancy Drew books when she was growing up. It’s also not surprising that she set out to create a modern-day Nancy Drew.

Twelve-year-old Devlin Quick is a bright, inquisitive, and headstrong young sleuth. Her mother is the New York City Police commissioner — the first woman to hold the position. In the nonfiction world, there has yet to be a woman named to the position — and Devlin is well versed in crime-solving techniques. She knows things like “you can’t put evidence in plastic bags.” And she has resources, somewhat at her disposal, that the rest of us can only dream about, like a professional lab to analyze DNA.

It’s late August, and Devlin and her best friend Booker are on the Vineyard staying with Booker’s grandmother in Oak Bluffs. The book begins with Devlin getting pummeled by a wave while trying to collect a water and sand sample from the Inkwell on an unusually rough day. She explains, “Everyone in my class had the same summer assignment. We each had to gather a water sample from the sea or a freshwater lake, to prove whether fish left their DNA befind.”

If collecting water samples for DNA sounds familiar, perhaps you attended Oak Bluffs seasonal resident Jesse Ausubel’s talk at the West Tisbury library during the summer of 2017. Ausubel, an environmental scientist working both at the Rockefeller University and Woods Hole Oceanographic Institution, explained to a rapt audience that you can now determine what types of fish have been in a specific water source through sequencing the DNA from a water sample. Fairstein learned about Ausubel’s work during a dinner party. “I was seated next to him,” she recalls. “He was talking about marine DNA and collecting water on the Vineyard to sample, and I have my own experience with forensic DNA, and I was thoroughly hooked.”

And now Fairstein, through Devlin Quick, has introduced this sciene to her readers. Devlin explains, “The pail of water I was filling this morning? If I mail the container of it to the lab, they can tell me what kinds of fish were swimming right here off the Inkwell this morning, Stripers, blues, tuna …”

But there’s more than science in Fairstein’s fast-paced adventure story. DNA samples weren’t the only thing that Devlin collected that morning at the Inkwell — hidden in the sand was a shiny gold coin, possibly a pirate’s doubloon. Devlin, Booker, and Booker’s 8-year-old brainiac cousin Zee, set off on an adventure to discover the authenticity of their coin, and learn that there might be more pirate treasure hidden on Martha’s Vineyard. They crisscross the Island and encounter unsavory characters who give chase in pursuit of the doubloon. Devlin, Booker, and Zee have to think on their feet as they untangle a strange and snarled story. They learn, among other things, that a young Island woman named Gertie Thaw once harbored, and perhaps fell in love with, the infamous pirate Lemuel Kyd.

Fairstein said that she isn’t aware of any pirates who actually did seek harbor on the Vineyard, but that “pirates were known to find islands that were not populated to bury treasure.” And while Gertie Thaw and the Thaw family are fictional, they feel Vineyard-authentic.

It should be noted here that not one book, but two, emerged from Fairstein’s meeting with Ausubel. After she returned to New York in the fall, Ausubel invited her to tour Rockefeller University, and the tour of this venerable institution tucked away on the East Side of Manhattan gave Fairstein an idea. “Blood Oath,” her next book for adults, comes out in March. Here’s a preview from her publisher: “New York Times bestselling author Linda Fairstein explores the depths of Manhattan’s secretive Rockefeller University in this timely, captivating thriller about the deep — and often deadly — reverberations of past sins.”

“The Devlin Quick Mysteries: Secrets From The Deep” by Linda Fairstein. Dial Books for Young Readers, 288 pages. Available at Bunch of Grapes and elsewhere.