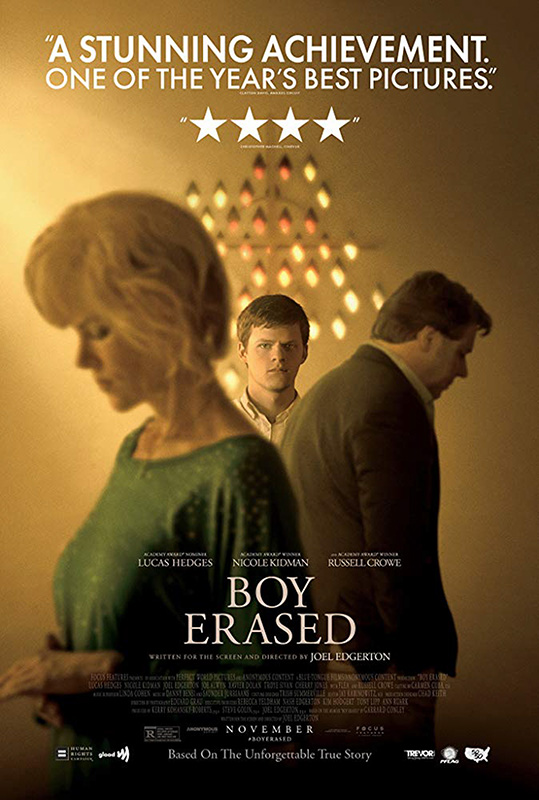 Based on the memoir by Garrard Conley, “Boy Erased” stars Lucas Hedges as the fictional version of Conley, Jared Eamon. In his first year at college, 19-year-old Jared is raped by Henry (Joe Alwyn), another student he has befriended. As if that isn’t bad enough, Henry calls Jared’s parents, Nancy (Nicole Kidman) and Marshall (Russell Crowe), and outs him. At first Jared denies the accusation, but then he admits he is attracted to men. Marshall, a Baptist minister and Ford car dealer, and Nancy are horrified. Marshall calls in two religious men he trusts, and the decision is made to send Jared to Love in Action, an Arkansas “pray away the gay” conversion center. Under pressure, Jared agrees he wants to change and is willing to go.

The program is supposed to last 12 days, and Jared’s devoted mother drives him to the center, staying nearby in a hotel. Victor Sykes (played by screenwriter and director Edgerton) heads Love in Action. The film quickly illustrates how corrosive this program is. Jared, who hopes to become a writer, is stripped of his journal, his cell phone, and all other personal items. His mother is told she cannot see him until the end of the day, when she takes him back to the hotel for the night.

Participants are given a three-ring binder with the rules for how Love in Action works. It includes making a family tree to identify bad behavior like homosexuality by other members of the family, and traits like alcoholism. It turns out Jared’s dad has arranged for a longer stay, to Jared’s surprise. He must also list his moral issues, like the episode with Henry and another with Xavier, with whom he sleeps without sex.

Sykes bullies the participants and shames them, accusing Jared of lying when he insists he didn’t have sex with Xavier. Each person must announce his sexual-orientation issues in front of Sykes and the others. Cameron (Britton Sear), a former teen football player, is particularly abused. At one point, he is beaten with a Bible, even by his younger sister. Jared is horrified and begins to resist the abusive program. His mother gradually begins to question its value.

As Jared’s parents, Kidman and Crowe make valuable additions to the cast, but “Boy Erased” belongs to Hedges. This 21-year-old has already earned a 2017 Oscar nomination for Best Supporting Actor in “Manchester by the Sea.” Other outstanding roles include “The Grand Budapest Hotel,” Lady Bird,” and “Three Billboards Outside Ebbing, Missouri.” Edgerton uses many close-ups of Hedges, who persuasively conveys the conflicted Jared, and, importantly, his basic good nature and honesty.

Information and tickets for “Boy Erased” and other films at the Film Center and the Capawock are available at mvfilmsociety.com.