Ed Cottle died at his home on Lambert’s Cove Road on Nov. 9, 2018, leaving behind Betty, his loving wife of 67 years. 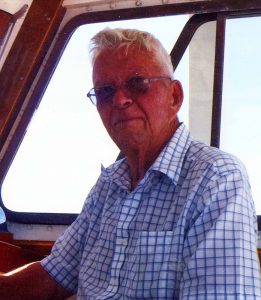 Ed was born to Lemira (West) and Fred Cottle on March 15, 1931. Sadly, Ed’s father died when Ed was just 3 years old. His mom moved Ed and his two sisters into a white farm-style house across from Lambert’s Cove Beach. Ed was very adventurous, and all of Lambert’s Cove became his big backyard. He knew all of his neighbors, becoming friendly with both the Islanders and the summer people. As he got older, the whole Island and the people would become very near and dear to Ed’s heart his entire life.

Ed also developed a passion for driving at a young age. If it had an engine and a steering wheel, he would figure out how to drive it. This skill and passion would serve him well, as he went on to operate tractors, cranes, boats, forklifts, and cars and trucks of all sizes. Early on in Ed’s career he did farmwork, land clearing, pond building, excavating, most anything where heavy equipment was required.

He married Elizabeth Gale on Sept. 15, 1951, and shortly after started the lumberyard E.C.Cottle, Inc. He worked tirelessly to make the lumberyard a very successful and well-respected business. Ed was a good boss, he gave countless people jobs, he would give anybody a chance if they wanted to work. He also appreciated his customers. Ed took pride in supplying them with building materials and taking extra effort to get special products. Ed never forgot his humble beginnings, and would often, very quietly, help a contractor or anyone if he saw that they were struggling.

When Ed was not working, his favorite thing was to get together with his buddies and have a few beers. He also loved steaming his boat Misty out of Lake Tashmoo, cruising around and stopping off at the Elizabeth Islands, especially Pasque Island. He loved taking long weekend trips with Betty to the Maine coast or to North Conway. The two of them spent quite a bit of time in the Florida Keys, where he would really relax and enjoy himself. Ed will be remembered for his hard work, his dedication, and love for his family and friends. He was kind, gentle, honest, generous, he had a great sense of humor, he was funny, he was mischievous, had a quick wit, and he loved to laugh.

Ed was predeceased by his parents and his sister Jane Gale Baker. He will be forever missed by his wife, Elizabeth Gale Cottle; his children, Jill Walpole, her husband Randy and their daughter Kate, Ed Jr. and his children Sarah, Jennifer, Rachael, and Ed III, Janet Johnson, her husband Glenn, their children Keith, Jon, and Elizabeth, Amy Look, her husband Gar,y their children Dan, Kevin, and Mary, Alan Cottle and his wife Debby. Ed also leaves behind many great-grandchildren, his sister, Barbara Child, lots of relatives, and dear friends.