Jean G. Hathaway died on Nov. 29, 2018, at her Edgartown home from respiratory failure. A lifelong resident of Edgartown, she was 84. 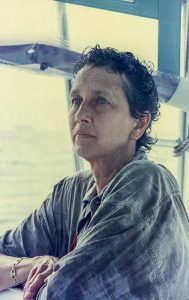 She was the daughter of Truman and Estella (Vincent) Galley. In 1963 she married Dick Hathaway. Their marriage ended in divorce. She was remarried in 1993 to Leo M. Cohen, who predeceased her in 2015.

Jean was born in Edgartown on Jan. 7, 1934, the 13th generation of the founding family of Thomas Mayhew, and the 14th generation of Mayflower descendants. She graduated from the Edgartown High School, and worked for a number of years as the bookkeeper for Grant Brothers Construction. Jean was involved in public service for much of her life. From 1974 to ’87 she was the Edgartown town treasurer. She also served on the board of selectmen from 1969 to 1972. She was a member of the Daughters of the American Revolution, the Garden Club, and the Historical Society, where she took great pleasure in maintaining the gardens of the Edgartown parks and being an integral member of the Edgartown Christmas Decorating Committee.

Jean enjoyed chewing the fat with strangers and friends alike. There was always a yarn to spin. Yet at the end of the day, she was extremely private, and found comfort and peace in her Edgartown home, fondly named Old Acres. Jean could have lived anywhere, but there was no place in the world she’d rather be than her Edgartown home, where she gardened, raised animals, and pampered her dogs.

Yet Jean was tough as nails. She was fiercely independent, and could be a force to be reckoned with. During the recession of 1975, Jean Hathaway was not deterred. “I’m filled with hope about the new year,” she said. “We’re getting back to some important values. Our vegetable gardens are examples of what we can do for ourselves. With less buying power — money — we’ll be in search of the things that are free here — the fresh air, the beaches, the wind. People out of work can scallop to feed themselves; I feel we’re lucky to be able to return to the land. If one thing should be locked in a time capsule for preservation, it’s our closeness, our feeling of community, our caring about each other. It’s like continuing the Christmas spirit all year. 1975 brings us hope.”

There will be a graveside service at the Old Westside Cemetery in Edgartown at 11 am on Friday, Dec. 7.