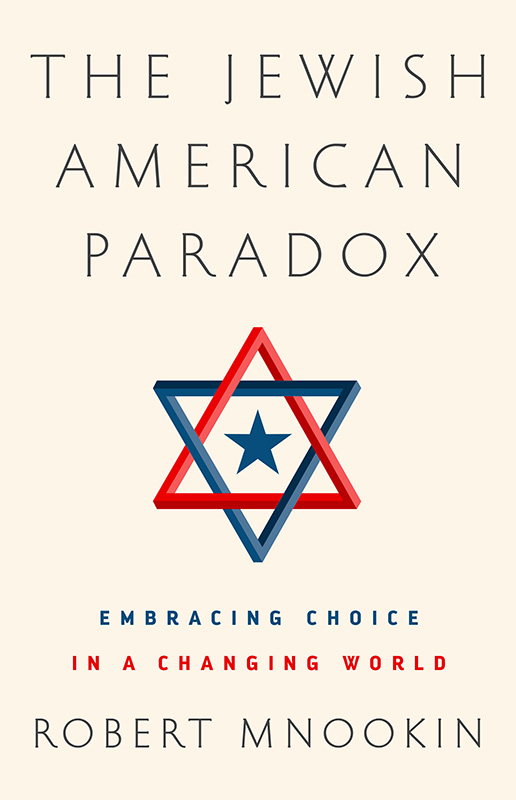 Last Wednesday, three swastikas were found spray-painted outside the office of a Jewish psychology professor at Columbia’s Teachers College in New York City. In an interview with the Washington Post, the professor remarked that she may have been the target of anti-Semitic vandalism because “I’m a Jew at this college — one of the only ones who acts like a Jew.” Non-Jews may be confused by the meaning of the professor’s response, but Jews will know she is referring to what Robert H. Mnookin calls “The Jewish American Paradox” in his new book of that title.

What makes someone Jewish? Is Judaism a religion or an ethnicity? If your mother is Jewish, does that mean you’re Jewish? Former Secretary of State Madeleine Albright grew up Catholic, and claims she didn’t find out that her parents were Jewish until a reporter uncovered information that her parents were Jews who fled Czechoslovakia and converted to Catholicism when she was a toddler. Does this make Albright Jewish? Can you be Jewish if you don’t attend synagogue, but eat lox and bagels for brunch and go to Jewish film festivals? Can you be an atheist and be Jewish? Alternatively, can you be Jewish and a Catholic priest? And this week in particular, can you call yourself Jewish if you find yourself shopping for a Christmas tree instead of lighting candles on your menorah? These are some of the questions Mnookin, the Samuel Williston Professor of Law at Harvard Law School and the director of the Harvard Negotiation Research Project, as well as an Edgartown seasonal resident, uses his considerable negotiation talents to gain a better understanding of, and to help us navigate the complexity of the American Jewish identity.

Mnookin begins his exploration with these words, “When I was 36 I was forced to confront my own ambivalence about being Jewish.” Living in England at the time, his 11-year-old daughter Jennifer was taking a religious education class in school and asked her parents, “When are we actually going to become Jewish?” Mnookin and his wife Dale had been living as assimilated and unaffiliated Jews. He responded to Jennifer by saying, “Your mother and I have always thought of ourselves as Jewish. We are not really religious, but we are Jewish.”

(Personal note — I was similarly conflicted and confused about by my Jewish identity at around the same age, and spent eight years contemplating what it means to be a non-religious Jew while making the documentary film “Matzo & Mistletoe.” I wish this book had been written years ago. I would have loved to interview Professor Mnookin.)

Mnookin takes an organized, comprehensive, and historical approach to deconstructing his topics. Chapters tackle subjects like: “Must a Jew Practice Judaism?” “Can We Survive Acceptance?” “The Puzzle of Jewish Blood,” and “The Challenge of Israel.”

“On average, we American Jews are not very observant, and include a surprising number of agnostics and atheists. Most of us, myself included, would flunk any religious standard that was at all demanding,” Mnookin writes. The idea of a religion which accepts atheists is, of course, at the heart of the paradox. In a 2013 Pew Report, 23 percent of Jews surveyed reported that they do not believe in God. While more than half of American Jews fast on Yom Kippur, only a quarter keep kosher. There has long been robust debate within the Jewish diaspora, and Israel, about Jewish pluralism, and Mnookin adds his inclusive perspective, writing, “I love this open, elastic quality to Judaism, which encourages every Jew to define his or her spiritual beliefs for him or herself. I love the fact that the religious tradition encourages Jews to grapple intellectually and spiritually with God and with each other.”

But what about a Zionist who became a Catholic priest, as was the case of Brother Daniel? Can you be both? Mnookin relates the complicated and fascinating case of Oswald Rufeisen, who was born to Jewish parents in Poland in 1922, became a Zionist, survived the war, converted to Catholicism, became the Carmelite monk Brother Daniel, and petitioned to emigrate to Israel as a Jew. Brother Daniel’s immigration case reached the Israeli Supreme Court, and Professor Mnookin breaks the case down for his readers as he might his students.

The book engages in a wide range of topics that influence the intricacies of identity. Mnookin questions what he calls the “matrilineal principle” — simply stated, if your mother is Jewish you are Jewish — and suggests relaxing the standards for converts to Judaism. He discusses how persecution and anti-Semitism can, perhaps perversely, heighten Jewish affiliation, and how the response to a 1990 report that suggested a striking number of American Jews could be assimilating out of Judaism reinvigorated the American Jewish community. He also spends several chapters writing about Jewish identity and Israel. Ultimately, Mnookin settles on what he calls a “big tent” approach to Judaism, writing, “You’ll find a huge variety of organizations and groups here. Some are religious. Others focus on social justice or the needs of Israel. There are educational programs, community centers, museums, and film festivals. Come explore.”

“The Jewish American Paradox: Embracing Choice in a Changing World” by Robert Mnookin; PublicAffairs. A great gift for Hanukkah or Christmas.