Growing up in Washington, D.C., we celebrated Hanukkah with our Christian neighbors, and later Christmas with them as well. Our living room, similar to a Polish synagogue where the architecture was designed to hide and protect, was one level down from the rest of the house, just by three steps. Opposite to that hide-and-protect architecture of our forebears, my parents designed their home to be surrounded by glass and windows. We stepped down into the living room every year and had maybe a dozen chanukiyot, or menorahs, an eight-tiered candelabra, and every kid in the neighborhood, no matter their background, shared in lighting these candles, one per night, and saying the prayers, including the recollection, “a great miracle happened here.”

Hanukkah, derived from the Hebrew verb for “to dedicate,” is a festival holiday like every other that occurs in the darkest month of the year. It is designed to recall perseverance and light as the actual light of day diminishes. In the accompanying story, a small army defeats their enormous enemy, an enemy far greater and stronger. The candles are lit for eight nights because in the temple that was destroyed by that massive army there was, so the story goes, only enough sacred oil to burn for one night. The oil, by “miracle,” lasted eight nights, enough time to create more sacred oil for the days to come, a symbol, again, of dedication and perseverance.

According to Rabbi Jill Hammer, co-author of “The Hebrew Priestess” and co-founder of Kohenet: Hebrew Priestess Institute, “this story reflects the miraculous return of the sun — in winter we think it will shrivel up and disappear, yet miraculously it begins to grow again and light up the ‘temple’ of earth.”

Our parties at home in Washington were splattered with fried doughnuts and fried latkes, and my mother, who writes Jewish cookbooks, would conjure up latkes from around the world, some traditional American (usually Ashkenazi) with the potatoes and leeks, and others with sweet potatoes, or cumin, or peppers. She threw — and throws — amazing parties.

My mother also used to come to my Quaker school when I was growing up to teach the kitchen staff how to make doughnuts, in Hebrew called sufganiyot, a jelly-filled treat we had annually at Hanukkah. We spent one winter in Israel when I was much younger, and my mother wrote a news story about sufganiyot. We traveled the country, like we did for another story another year on “the best hummus in Jerusalem,” and we gorged ourselves on freshly fried jelly donuts that erupted in pop-up shops and bakeries across the country come December. I remember throngs of people waving money in order to get the best of the best at one Jerusalem market, and that taste of sweet soft dough, the almost crisp surface, and the hot jelly middle.

At school, we would pause at Hanukkah, even though only a handful of kids per class were Jewish, and eat home-fried doughnuts and tell the story of the Hanukkah miracle. I went to Quaker school and also supplemental Hebrew School twice a week, where they passed out terrible not-homemade jelly donuts that were plump and coated in powdered sugar.

I remember my grandmother, who once prayed in that Polish synagogue that despite its protective design, wasn’t able to save most of its inhabitants from destruction, joining us. I remember the joy of watching her and my mother shred potatoes. My grandmother would dress up, put on lipstick even, and really light up from within, a departure from a rising depression she experienced as she came close to leaving this world, and her smile was something divine. It was this wild indicator of life continuing, of the capacity even in darkness and memory of horrors from the past, and present, finding way to pause and love the food, the family, the throng of children from a diverse neighborhood gathering to light small contained flames, to spin dreidels, to share in gift giving and song. My grandmother’s smile was a sign that the small army was not defeated, and our choice to rejoice in our Jewish practices and identity were also signifiers of perseverance. We not only survived, but resurrected a celebration of the very thing they sought to destroy: Jewish practice. Jewish spiritual growth. Jewish joy. Jewish people.

December 2018 is a time for gladness, for hot food, and gushing fried delights, for lighting new light as the sun’s shining glory temporarily wanes. This year, of all years, as we face a rise of violence against those celebrating this holiday, joy is paramount in a new way. It is an act of spiritual resilience, and also, when joining one’s neighbors in the joy, the hot food, the lighting of candles with another, in choosing to listen and to learn, it is an act of miracles. Because joy is contagious. Because it is the thing that gives strength to a spirit that might otherwise wither, like the sun. Which, as we know, never shrivels, but is simply shrouded.

In the words of the great Rabbi Shefa Gold, “It is truly miraculous that the single spark of hope that we excavate from the darkest part of our hearts can ignite the radiant fires of passion that illuminate our way forward, even on the darkest night.”

This year remember to ask your neighbor if they celebrate Christmas, or another holiday. You never know. Being acknowledged in times like these, for each person’s celebration of light, be it Christmas, be it Hanukkah, Kwanzaa, Diwali, Yule — whatever it may be — joining in that joy is a gift. 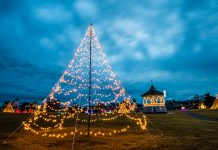 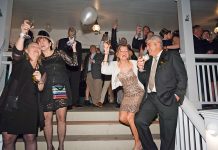 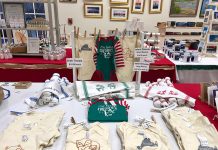