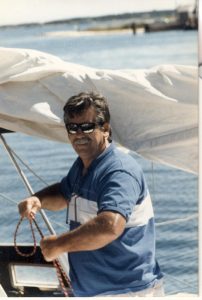 Jim was born in Oak Bluffs on August 8, 1935, to Louis K. Sr. and Carmen (Gonsalves) Goodwin. He attended the Oak Bluffs School and graduated in 1955, and immediately enlisted in the Navy to serve his country from 1955 to 1961. After discharge, Jim was working in Boston with an animal rescue organization when he met his wife, Adrienne H. (Bagley) Boardman. They married in July 1964, and settled in Framingham, where together they raised two sons. In February 1972, Jim and his family returned to his beloved Martha’s Vineyard. He worked at many Island professions before taking the position of shellfish constable for the town of Edgartown on July 4, 1980, where he was employed until his retirement in 1997.

Jim was an easygoing man with a big heart who considered everyone a friend. He loved the outdoors, spending many years sailing and living on his sailboat. He was an avid golf and tennis player, and gave lessons in both sports for many years. You never knew where you might run into Jim. He frequented Island coffee shops and loved people watching in town with his longtime companion Virginia Omar and furry friend Pepe.

Jim is survived by his two sons, J. Aaron Goodwin and his wife Brenda (Correllus) of Aurora, Mo., and David C. Goodwin and his wife Connie (Miller) of Vineyard Haven; and his sister, Beverly Corwin. He was predeceased by his sister Ida (Buzzy) Gardner and brother Frank Goodwin. He is also survived by four grandchildren, four great-grandchildren, and numerous nieces and nephews.

A celebration of Jim’s life will be held next summer, with a date to be announced. Donations in Jim’s name may be made to the Animal Shelter of Martha’s Vineyard, P.O. Box 1829, Edgartown, MA 02539.