Turkey Gobblers from Humphry’s and a Liz Lemon from 7a are among the known and beloved sandwiches you can find on Martha’s Vineyard. But what about the Island’s lesser-known sandwich treasures? Not the variety that comes around in spring, and is 86’d by fall. These aren’t the sandwiches that are packed up and brought to the beach, or enjoyed with a glass of rosé on the harbor. These are sandwiches that are protein-rich, packed with crisp veggies, housemade condiments, and pressed between two pieces of bread to satisfy our hard-working community all year long. These are sandwiches from the places with less publicity that persevere through our dismal winter months to make sure no lunch break goes hungry. I thought off-season sandwiches would be a good topic to investigate, not only because, well, who doesn’t love a good sandwich? But also because who isn’t up to their elbows in holiday cooking and baking, wrapping and decorating, and not to mention all the holiday cleaning? Instead of giving you another recipe to have to go shopping for, prepare, and clean up after, I thought I’d give you a good place to find a great sandwich. So have yourself some merry season’s eatings, and let someone else do the cooking. We aren’t supposed to diet until January anyway.

First I stopped by Fella’s in West Tisbury. I’m familiar with Fella’s cuisine, but this was my first time at the takeout shop. I took co-owner Jane Cecilio’s advice and ordered the Southwest Chicken Panini. She insisted I try the Roasted Turkey sandwich as well, and with little convincing, I gave in. The Southwest Panini was stacked with juicy chicken breast baked to perfection, with a crispy, spicy rub on the outside, served on focaccia with tomato, provolone, chipotle mayo, and the optional addition of bacon and avocado. The mayo had a distinct and delicious flavor that not only held the sandwich together, but could also be easily eaten by the spoonful. Jane said the mayo is a homemade Fella’s creation that goes well with everything. I couldn’t disagree. After a few bites of the Roasted Turkey Sandwich, I could see why it’s their top seller. With pepperJack cheese, applewood smoked bacon, red onion, and the most enjoyable deli turkey I have ever had in my life, this flavor combination can’t be beat — simple and savory with a kick. These aren’t your run-of-the-mill sandwiches, and none of them exceeded $10.50. I will definitely be back for more sandwiches, and in hopes of purchasing all the chipotle mayo they have in house.

Next on my list was Vineyard Haven’s Island Fresh. Having ordered their Portuguesa pizza once or twice (or 10 times), I am familiar with their pizza menu, but not their sandwiches. I was greeted by owner Paulo Miranda, who to my surprise was in the middle of kneading an impressive amount of bread dough. He told me that all of his sandwiches are served on homemade bread, a rare treat for a local sandwich lover. I studied the menu and decided on the Veggie Panini. With roasted red peppers, eggplant, onions, and sautéed spinach and Cheddar, it wouldn’t matter to me if this sandwich was served on Wonder Bread. It was simple, fresh, and bursting with flavor. Typically, I like a good veggie sandwich with some hot mustard, but this lunch tasted perfect exactly how it was served. The eggplant was sliced thin and remained crispy despite being under layers of spinach. The bite of the onion paired well with the sharp Cheddar cheese and mildly sweet red peppers. All the flavors and juices were soaked up effectively by the soft and fluffy inside of the homemade bread, and kept together by its crispy outside. This sandwich was proof that with a few high-quality and homemade ingredients, simplicity is a culinary key.

My last stop was another local joint that I have driven by my entire life but never had an opportunity to try. Soigne, located on Upper Main Street in Edgartown, did not displease. I thought I would end my sandwich venture by ordering a classic Italian, with a prospect for some French influence. My expectations were met as I watched the owner, Ron Cavallo, who goes by “Puppy,” assemble the ingredients between two pieces of toasted baguette. He asked if I wanted to add hot peppers; I asked him if it was a day ending in “y.” Just a few minutes later I was handed an oversize sandwich with the aroma of fresh toasted baguette, homemade Italian dressing, and hot peppers. Before I was done soaking up my delectable first bite, Puppy was packaging up some of his scratch-made chicken salad — his true claim to fame. I was too interested in the best Italian sandwich since my last trip to Little Italy in the Bronx. I swore to myself I’d never eat another Italian again unless it was served on a toasted baguette. I reluctantly gave the chicken salad a try — I’m not usually a huge fan — but I was hooked. The barely-there mayonnaise was the perfect accompaniment to the moist chicken, fresh herbs, and plentiful black pepper. Soigne also sells wine and chocolate, so I knew I would soon become a regular.

To a foodie who grew up on the Island, it’s incredible there’s still so much local cuisine I’ve yet to try. We all get so stuck in our routines, and tend to classify any trip that takes more than 10 minutes as a lengthy commute. Now might be a good time to put down the wrapping paper and stop doing those dishes. Take the drive, the walk, or the bus ride, and order yourself a sandwich from a place you’ve never been to before. Your tastebuds and holiday season sanity will thank you. 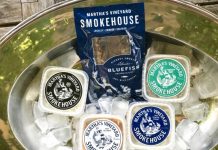 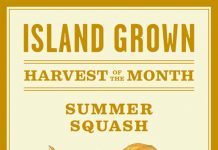 Harvest of the Month: Summer Squash 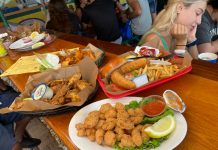 Fly to the Coop this summer