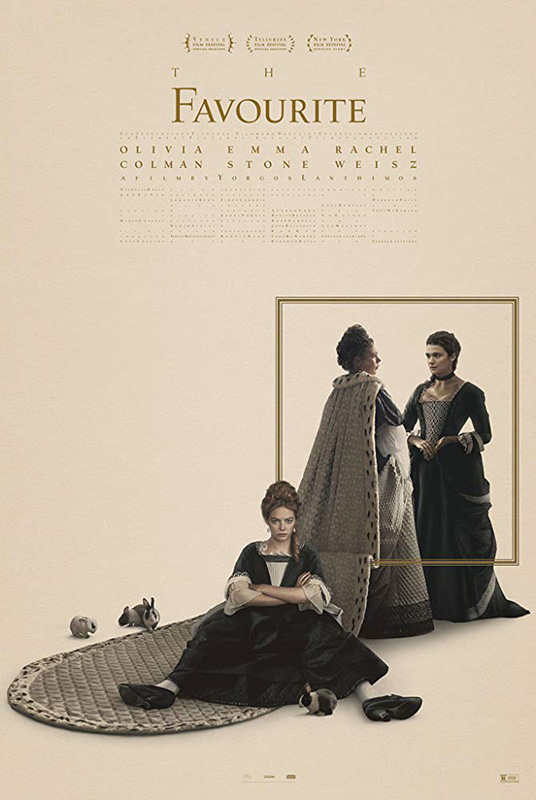 Now playing at the M.V. Film Center, “The Favourite” will set you back on your heels, especially if you have romantic ideas about costume drama. Greek director Yorgos Lanthimos spins a web of deceit, intrigue, and political maneuvers in this satirical black comedy. The plot revolves around the triangle of Sarah, Lady Marlborough, played by Rachel Weisz; Abigail Hill, played by Emma Stone; and Queen Anne, played by Olivia Colman.

Each of the three women has earned a Golden Globe nomination, Colman for Best Actress, and Weisz and Stone for Best Supporting Actress. “The Favourite” has garnered a total of five Globe nominations, including Best Picture, and it’s a good bet that Oscar nominations or wins will come its way. The viewer may not recognize her, but Colman starred in “Tyrannosaur” (2011). Weisz won an Oscar for her performance in “The Constant Gardener” (2005), and Emma Stone won hers for “La La Land” (2016). Each of the three gives a spot-on performance in “The Favourite.”

The film occurs in the early 18th century, when Anne reigned as the last Stuart monarch. Plagued by the autoimmune disease gout and still mourning the loss of 17 children to miscarriage, stillbirth, or illness, she keeps 17 rabbits as replacements. Interestingly, her late husband, whom she doted on, is never mentioned. The queen is portrayed as an overweight, unattractive presence who relies on Sarah to make decisions for her. Sarah is bossy, politically astute, and the queen’s lover. In comes Abigail, whose father gambled her away in a card game. Having lost her aristocratic standing, she goes to her cousin Sarah and asks for work. After a nasty push into a mud patch, Abigail arrives filthy dirty and is assigned to the kitchen as a scullery maid. But she quickly inveigles her way into Sarah’s retinue and friendship.

Once this triangle is set up, all hell breaks loose, but in underhanded ways. Abigail is determined to regain her lost rank and replace Sarah as the queen’s confidante. Along the way, the director and his screenwriters, Tony McNamara and Deborah Davis, insert nasty little comic scenes. The bewigged and grotesquely made-up male legislators hold duck races, eat pineapples, and throw fruit at a naked man. Although in the 18th century it was a man’s world, the men definitely take a backseat in this comic imbroglio.

Once Abigail marries Masham (Joe Alwyn), she regains aristocratic status. Her next move is to replace Sarah. Unlike Sarah, she dotes on the queen’s rabbits, provides soothing herbs for her gout-ridden legs, and provides sexual favors. In general, sex is not shown as a manifestation of love, but a form of manipulation.

“The Favourite” uses music from Schubert, Handel, Bach, Purcell, and Vivaldi, as well as somewhat grating modernist music by Olivier Messiaen, Luc Ferrari, and Ann Meredith. The camerawork relies successfully on natural light and wide angles in the mostly interior scenes, including walls crawling with tapestries in Anne’s bedroom chamber. In the case of Queen Anne, the viewer should check out the actual history. According to recent biographies, she was not the ugly dolt of the movie, but a popular monarch who reigned in a relatively peaceful period, negotiating political machinations despite her illness. The arts flourished under her, she supported Handel with a pension, and Queen Anne furniture evolved during her monarchy. Director Lanthimos picks and chooses among the history of the era he satirizes, and “The Favourite” remains, after all, a work of fiction.

Information and tickets for “The Favourite” and other films playing at the Film Center and the Capawock are available at mvfilmsociety.com.