Have you donated to the Red Stocking Fund yet? Mrs. Crist, and later, Mrs. Tobin, knew of the need, and identified a way to fund it: Instead of writing greeting cards to your local Island friends and neighbors, contribute the amount saved on cards and postage to the Red Stocking Fund. Box 600, Edgartown, MA 02539. Merry Christmas!

The brassicas make great fall and winter crops in Island gardens; I cannot think of any exceptions. They store well in cool basements and fridges, as well as being available in stores all winter. The following dishes for holiday dinners may all be made from the garden.

My family is a bit spread out this year, but if we were all gathering together at my house, here is what I would ask talented family cooks to bring:

Trim about 2 pounds of Brussels sprouts, and parboil in a large pan of boiling salted water for 5 minutes. Drain and refresh in cold water until cold; drain. Gently fry six rashers of bacon, cut into bite-size pieces, in a large frying pan for 10 minutes until crisp. Remove bacon pieces from pan, leaving fat behind, then add about half a pound (200g) of shelled and peeled chestnuts. Fry chestnuts over high heat for a few minutes until tinged. Remove chestnuts from pan, and add Brussels sprouts to it with a splash of water, then cover and finish cooking over medium heat, stirring now and then, until just tender. Uncover, turn up the heat, add four tablespoons butter, and sauté the sprouts for about 2 min more. Add the bacon and chestnuts back to the pan, season generously with salt and pepper. Finish in oven until slightly crispy.

One head cauliflower cut in bits, coconut oil to coat (melt first, otherwise it solidifies when it comes in contact with cold cauliflower), salt. Toss together and roast in a pan at 425°F until browned (flip a few times to ensure even browning), 15-20 minutes. Toss with lemon zest.

Make this at least a day before serving, and let it mellow. In large heavy pan, warm 2 tablespoons bacon drippings; add 1 tablespoon olive oil. Chop medium to large onion and sauté until soft. Remove outer leaves and slice medium to large red cabbage fine. Add cabbage to pan and stir. Chop two apples, or one apple and one pear; add to pan. Add ½ cup of balsamic vinegar or red wine, or ¼ cup of each. Stir everything, add 1 tablespoon of butter, put on lid, and cook on medium low heat until cabbage is tender, or put it in a slow cooker. Correct seasoning (salt and pepper). Let it sit overnight for flavors to meld and excess liquid to be absorbed. To heat it and serve it the next day, you can put it in a casserole and stick it in a slow oven.

Friends in Tucson bring Meyer lemons from their tree when they visit the Island during the holidays. The harvest of slow-ripening Meyer lemons is just in time to make a memorable gift, which instilled in my covetous heart the desire to have my own Meyer lemon plant.

I went down to a local garden center and purchased a good-size potted lemon a couple of summers ago. It joined my small collection of citrus: a key lime, a calamondin, a ‘CaraCara’ orange, and two mandarins. Last year the plant set fruit heavily, but then early-morning marauding deer nipped them all! I was shocked, but smirked to think what an astringent mouthful each stolen unripe green lemon must have been.

The plant of the Meyer lemon is bushy and well adapted to pot culture, as are other selected citrus varieties. This year there are two golden lemons. The Meyer lemon fruit is slightly sweeter than regular lemons, with a rounder shape and thinner rind, but is used in much the same way.

The original plant was discovered in China by the plant hunter Frank Meyer in 1908, and is a naturally occurring hybrid between two different citrus species. Wikipedia cites them as citron and a mandarin orange, while others cite regular lemon and mandarin orange as the parents.

The lemon harvest may be stored in the refrigerator bin or made into the North African staple, preserved lemons. I plan to freeze one and then grate it with the food processor, the frozen “lemon dust” being stored in the freezer in an airtight jar. It is a tasty addition for recipes that call for lemon zest, such as the cauliflower recipe above.

Island boxwoods are manifesting signs of disease here and there. Without a plant pathologist’s lab diagnosis, it is impossible to say which of a number of pathogens may be the source of the problem. However, an article about Alison Green’s garden in North London in the October 2018 issue of RHS’s the Garden refers to her extensive use of boxwoods and disease prevention.

Alison Green prefers the hedges to have rounded tops, not square, for better light and air all around. She keeps other plants from flopping onto the hedges, because that had previously caused disease. The hedges are clipped at the end of May, and cleanup is meticulous. She applies no treatments because she gardens organically, but emphasizes keeping the hedges watered and fed. I would add to that, top-dress with composted manure. 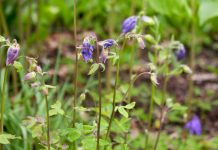 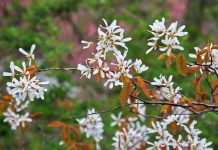 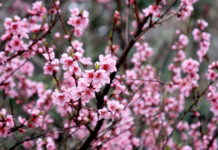