Sometimes the puck just doesn’t go in the net. The MVRHS girls hockey team had one of those games against longtime rival Scituate in a 2-0 loss to the Sailors on Thursday afternoon at the MV Ice Arena.

Christine Oar scored both goals for the Sailors, one at 4:31 of the first period from Madi Richman and Elliette Leahy, and another 6:35 into the second stanza from Richman.

“The conversation was about the last couple of shifts in particular, about being resilient and taking care of, frankly, the physical and the mental part of the game,” he said. “We had lost focus because we were tired, we got overwhelmed and lost our way, lost all the things we need to do to be competitive, and the only thing I wanted them to do was to compete for the rest of the period, one shift at a time.”

The coach’s speech lit a fire under the Vineyarders, who tilted the ice toward the Scituate goal for the remainder of the period. Ava BenDavid drew a penalty shot, awarded after she was hauled down at the blueline to prevent a breakaway, and snapped a wrister from the slot, but Scituate goalie Molly Walsh made the save with her blocker. Meghan Sonia followed with two scoring bids, and hit the post twice. On the first attempt, the puck bounced off the right post and wobbled to a stop on the goal line. The Vineyarders started to celebrate, but the puck did not cross the line and the score remained 2-0 in the Sailors’ favor.

“We earned the breaks, but we didn’t have the puck luck,” Coach Fiorito said, “It would have been nice to be 2-2 at the end of the period after playing the best hockey we’ve played in a while. The beauty of sports is it’s not personal. The puck bounces your way or it doesn’t, but if you play the right way, eventually you are going to be rewarded with goals and wins.”

In the third period, the Vineyarders had one more golden opportunity to get on the board, but Ava BenDavid’s wrister from the high slot clanged off the crossbar. From there, Vineyard legs started to tire and the Sailors ratcheted up the pressure. Enter Vineyard goalie Amelia Simmons, who responded with six outstanding saves, one with her blocker and the others with her pads.

In the end, the Vineyarders didn’t break under pressure, and rose to the occasion against a quality opponent. “We have to play mistake-free hockey against the teams we’re playing against if we want to be successful,” Coach Fiorito said. “The game shouldn’t have gotten away from us, and I’m happy it didn’t, for them. We’re better than we were last year. Today, a bounce of the puck either way, and it’s a different game. We want to trust the process. We’re trying to get better mentally and physically every period of every game.”

The Vineyarders will again try to notch that elusive first win of the season, at home on Saturday against Nauset. The puck drops at 1 pm. 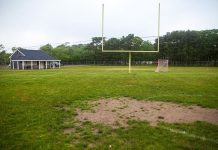