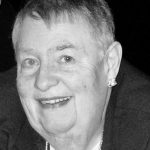 Joan Glodis, born Sept. 19, 1938, to Philip and Edna Duprey in Worcester, died Dec. 3, 2018, in the company of her daughters in Wilson, N.C. A wife, mother, grandmother, friend, nurse, and craftswoman, Joan touched many people with her warmth, talents, and wit. She was a 1959 graduate of Worcester City Hospital School of Nursing, where she worked in obstetrics and met her future husband of 45 years, Frederick Glodis.

In 1963, Joan, Fred, and a new baby moved to the Island as Fred began his career teaching science at the Tisbury School. They would make the Island their home for the next 40 years. Joan took a break from nursing while her three children were young and later resumed with private-duty nursing until she retired. Throughout this time, Joan was involved in many creative pursuits. There were numerous hobbies she tried her hand at with considerable skill such as egg artistry, cake decorating, miniature crafting, sewing, cooking, wreath-making, needlework, and quilting. Joan was generous with her knowledge, teaching workshops at Dukes County Extension and providing applique exhibitions in her later years. Family, friends, and teachers were recipients of her many talents and gifts.

In 2003, she and Fred left the Island and headed for Wilson, N.C., to care for Joan’s parents. After her parents and husband passed away Joan continued to enjoy her North Carolina grandchildren’s weekly visits, preparing special menus and craft projects for them, and she enthused over news of her grandchildren in Ohio. For 16 years she was also a very active member of Wilson’s Peace by Piece quilting guild, serving as president and treasurer and winning many awards for her quilts. Mom would say, “You know, one hundred quilters can make the same pattern, and you will end up with one hundred different quilts, because each quilter brings their own special gift to each piece they work on.”

Joan is predeceased by her parents, her brother Robert Duprey, and her husband and their infant son Frederick Glodis Jr. She is survived by daughter Kathleen and her husband Eric Poehler of Vineyard Haven; daughter Kimberly and her husband Curtis Martin and their children Amelia, Isaac, and Talula, of Rocky Mount, N.C.; and daughter Abigail and her husband John Tenbrook, their daughter Maddox and grandson Ari Siegler of Euclid, Ohio.

A celebration of Joan’s life and artistry will be held on the Island in May of 2019. Place, date, and time will be announced at later date.