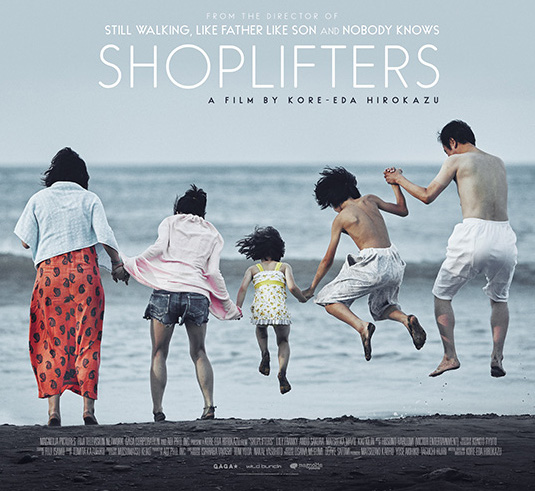 “Shoplifters” comes appropriately to the M.V. Film Center after some of the busiest shopping days of the season. Written and directed by Hirokazu Kore-eda and based on a news story, it describes the Shibatu family’s small-time criminal life on the poverty line in Tokyo. “Shoplifters” won the prestigious Cannes Palme d’Or and was recently nominated for a Golden Globe for Best Foreign Film.

The Shibatus are not exactly an ordinary family. For starters, they’re not blood relatives but a makeshift family of mixed-up relations. The film opens with Osamu (Lily Franky), who acts as husband and father, with his 10-year-old “son,” Shota (Jyo Kairi), filching food from a grocery store. Osamu uses hand signals to alert Shota when he’s blocked the store clerk from seeing the boy’s thefts. The food the two steal supplements the family’s marginal resources, and Osamu sells the non-food items. Osamu works part time in construction, while his “wife and mother” of the clan, Nobuyo (Sakura Andô), holds a part-time job at an industrial laundry. Others include “Grandma” Hatsue (Kirin Kiki), who helps them subsist on her ex-husband’s meager pension and whose shack they crowd into. The older “aunt,” Aki (Maya Matsuoka), works as a peep show stripper.

With a slice-of-life approach, “Shoplifters” illustrates the many kinds of criminal activities the family pursues, including theft of fishing poles, which leads to a fishing expedition then the poles’ sale. Despite the illicit activities and bogus relationships, the Shibatus are close knit, loving, and even happy. They make a trip to the beach, build a snowman, and watch a fireworks display.

One day when father and son are out walking, they pass a young girl, Yuri (Miyu Sasaki), alone on a balcony, trying to keep warm. They suspect she’s neglected if not abused by her parents, and once they take her home, then see she has burn scars. She’s embraced there, given a new name, Lin, and welcomed as a new member of this peculiar family. Usually you can’t choose your own family, Hatsue observes. Shota and Yuri hang out together, with Shota explaining that he doesn’t need to go to school because it’s for children who don’t learn at home. Shota also points out their code of honor: they don’t steal personal possessions, and items in stores don’t belong to anyone.

The precariousness of the family’s resources becomes increasingly evident when Osamu injures his leg and can’t work. Nobuyo’s boss announces that she and another employee have to choose which will be fired. Another crisis occurs when Grandma dies, diminishing the family’s source of income, and the family has to decide what to do with her body. In yet a further development, newscasters announce that Yuri’s parents claim she’s been kidnapped.

Rather than an outright indictment of the Shibatu’s thievery, “Shoplifters” suggests how Japanese society leads to their marginal existence. The Shibatu’s abduction of Yuri could be said to echo their shoplifting activities. In both cases, their motivation reflects resourcefulness and kindness. Director Kore-eda examines family life with understanding and warmth as he has in other films, such as “After the Storm,” which also played at the Film Center. He reveals a complex world with great subtlety.

Information and tickets for “Shoplifters” and other films playing at the Film Center and the Capawock are available at mvfilmsociety.com.