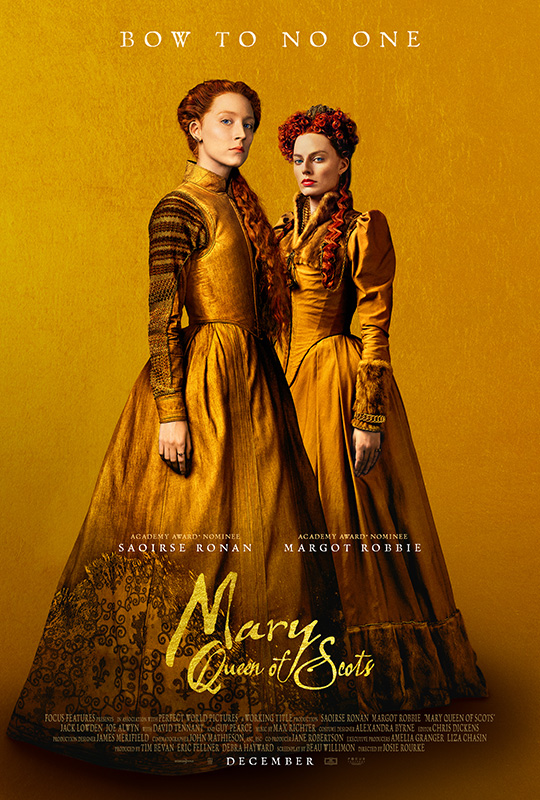 “Mary Queen of Scots” will screen at Martha’s Vineyard Film Center this week. The 16th century historical drama explores the turbulent life of Queen Mary Stuart. Josie Rourke directs the film, and it stars Saoirse Ronan as Queen Mary and Margot Robbie as Queen Elizabeth I. Both actresses have earned Oscar nominations — Ronan for “Lady Bird,” and Robbie for “I, Tonya.”

Rourke, a British theater and film director, uses her theatrical background to good effect, while screenwriter Beau Willimon, showrunner for the first four seasons of “House of Cards,” wrote the compelling screenplay.

Many well-known actresses have played Queen Mary in past productions, including Katharine Hepburn, with Florence Eldridge as Queen Elizabeth in 1936; Vanessa Redgrave with Glenda Jackson in 1971; and Samantha Morton with Cate Blanchett in 2007.

“Mary Queen of Scots” opens with Mary’s beheading in 1587. It shifts back to her return to Scotland from France at age 18. Already widowed, Mary was briefly the Queen of both France and Scotland. She is Catholic in a strongly Protestant country. She considers herself a sister to English Tudor Queen Elizabeth I, but they are cousins by blood. Mary is a member of the Stuart house, and believes she is the rightful queen of England as well as Scotland. She hopes to unite the two countries. A rivalry develops between Mary and Elizabeth, who correspond with each other, but never actually meet. The film depicts the two queens meeting for dramatic effect.

“Mary Queen of Scots” adapts a modern, #MeToo narrative. Both queens struggle to fend off male attempts at domination. Mary marries her second husband, Lord Darnley (Jack Lowden), in order to produce an heir. They have a son, James VI (Martin Compston), who succeeds both Mary and Elizabeth as King of Scotland, Ireland, and England. David Rizzio (Ismael Cruz Cordova) is an Italian composer, and a close friend of Mary’s. He is gay, and seduces Lord Darnley. Elizabeth protects herself from male control by remaining a virgin.

Queen Mary and Elizabeth’s rivalry is conveyed in letters read over idyllic outdoor scenes of the Scottish countryside. The two regents are framed with different personalities and approaches to ruling. Mary is more relaxed and spirited, with a tolerance for foreigners. She has nontraditional sexual behavior, and a willingness to accept Protestant as well as Catholic subjects. She enjoys spending time with her ladies-in-waiting. Nevertheless, her older half-brother, the Earl of Moray (James McArdle), and Protestant cleric John Knox (David Tennant) both conspire against her. Elizabeth is a more anxious and cautious ruler. She negotiates with Mary over making the Scottish queen her heir by sending her friend Lord Robert Dudley (Joe Alwyn) to Mary for a political marriage, but Mary prefers Lord Darnley. After she takes refuge in England, Mary’s attempts to overthrow Elizabeth lead to her execution for treason.

History couched Mary a villain, but the film offers her redemption. For example, she refuses to divorce her second husband because it would make her too much like Henry VIII, who changed English law to divorce many of his six wives.

Performances by Ronan and Robbie are powerful, the costumes superb, and the story gripping. It should inspire history buffs to read the film’s inspired source, “Queen of Scots: The True Life of Mary Stuart,” a book written by British historian John Guy.