The Houses of Grace are open for business, and so is the Warming Center set up at Good Shepherd Parish on School Street in Oak Bluffs. Houses of Grace provides overnight shelter for those who find themselves without a place to sleep for the night, and the Warming Center is a place to keep warm and get a hot lunch. The homeless shelters are open every night of the week throughout the winter months on the Island, and the warming shelter is open Monday through Saturday — 12:15 to 2 pm on Monday and Tuesday, and 11 am to 2 pm Wednesday through Saturday.

In this column I write about what faith communities are up to on the Island. Sometimes I write about stuff that’s happened to me. Well, I decided to write about the Warming Center after taking a tour of the spruced-up facilities last month. There’s a brand new bathroom where folks can shower and clean up, a washer and dryer they can use, and a fresh coat of paint; it’s a bright, clean space. It’s clear that Good Shepherd Parish is stepping up their commitment to the community. This makes me happy, as I remember all the beautiful ways the Catholic diocese in Syracuse, where I moved here from, did the same.

I’ve written about homelessness many times, and I’ve done a lot of writing about church volunteers who help out in the community. I’ve spent time with people who were homeless in Syracuse, just talking with them and trying to understand their situation. If you read the New Testament even fleetingly, you realize you’re called to help your brothers and sisters no matter where they are. I had a wake-up call last week when I visited the Warming Center.

I thought I’d go there and talk to some people who are homeless and ask how they cope, where they sleep, and then I would write about it. I plopped down unannounced at the table in the kitchen of the parish’s warming center in Oak Bluffs with my laptop and little notepad. There were two men eating a hot lunch — comfort food — meatloaf and macaroni and cheese. Fruit and granola bars and pie and cake were on the table. There were a couple of women volunteers who were friendly and seemed like the kind of people who would “go with the flow.” As it turned out, I never opened my laptop.

What I found was a commitment that I won’t forget to the half-dozen men who were there. As it turned out, someone from Community Services brought in a man around my age who was inebriated. He needed to get out of the elements, and if they could sober him up, he might make it to an AA meeting that day or the next.

The volunteers, and the person from Community Services, stayed with him, at least for the hour and a half that I was there, and they showed no signs of leaving him. Rather, they planned to take him to the community supper later and then to the overnight Houses of Grace shelter that night. They would try hard not to let him out of their sight. In the meantime, they stuck it out. They went along with his jokes, laughing with him and not at him, they gave him hot coffee, and kept trying to coax him to eat something. He wasn’t having any of that.

He did talk to me a bit after he found out I was with The Times, but before that he asked me upfront, “Are you a drunk too?” I told him honestly that I wasn’t at the moment, but that yes, I’ve been drunk before. It was clear that it wasn’t exactly what he meant, he wanted to know specifically if I was a drunk. He said he was having a bad time right now. I couldn’t say that I was a drunk that day, but I told him that everyone has their crap to deal with and for that day anyway, no, I wasn’t a drunk. He was OK with that answer.

He was a jovial person, someone who’s been on the Island for decades, and a skilled professional. He told me some of his story, shaking his head and saying he didn’t ever expect to be homeless.

He lived with his girlfriend for a long time, they had their ups and downs from what I gathered. She kicked him out, and he started sleeping wherever he could at night. Sometimes when he spoke, he’d shake his head saying, “I haven’t always been like this. I can make money.”

I wondered how close any of us have been to his situation. One wrong relationship, one drink too many, one broken tie with friends or family, one paycheck away.

He’ll stay in my heart, that guy with that story. And also the volunteers and the man from Community Services who wouldn’t let him be alone. That’s the Gospel of Matthew, alive and well in Oak Bluffs.

The Rev. White-Hammond grew up in Boston, an activist since her high school days. In 2001 she became executive director of Project HIP-HOP (Highways Into the Past — History, Organizing and Power), an organization that she had been involved with in high school. At PHH, she taught young people to draw on the history of their ancestors and to use the arts as a tool to raise awareness about social issues. During her time there, PHH youth created artistic pieces on issues ranging from juvenile incarceration to funding for public transportation. They performed throughout Greater Boston in camps, homeless shelters, senior citizens’ homes, and public transit stations, as well as for leaders like Mayor Marty Walsh and Gov. Deval Patrick.

White-Hammond has received many awards for her work with nonprofits, including the Barr Fellowship, the Celtics Heroes Among Us, the Roxbury Founders Day Award, and the Boston NAACP Image award. In June 2014, she stepped down as executive director of PHH to focus on her work within the church.

She enrolled at Boston University School of Theology while continuing to serve at her local church, Bethel AME, as the minister for ecological justice. In the spring of 2017, she graduated with her master’s in divinity, and was ordained an elder in the African Methodist Episcopal Church. Last spring the Rev. White-Hammond was appointed to pastor a new church. She is currently working with a multiracial, multi-class team of leaders to build a church focused on reaching those who have been alienated by traditional church.

I can’t wait to hear her speak on Friday; I’m sure it’s going to be powerful.

The Rev. Matthew Splittgerber, pastor of the Vineyard Assembly of God Church, invites everyone to the Vineyard Haven church on Sunday, Jan. 20, at 10:30 am when the team from Teen Challenge Brockton will visit.

They’ll be talking about their work with those with addiction. Pastor Splittgerber told me there are at least a few Islanders who are familiar with the organization. The website for Teen Challenge Brockton explains what they do: “Provides adults, teens and families with an effective and comprehensive Christian faith-based solution, clinical counseling, and life-coaching for drugs, alcohol, and other life-controlling problems in order to become productive members of society.”

This ministry’s roots come from the first center located in Boston and established in 1964, so they’ve been around for a while. Unlike many other programs, Teen Challenge offers long-term residential recovery options. And don’t be discouraged by the name of the organization, because they have programs for adults as well as teens. With all the struggles with addiction going on, this might just be the right program for you or someone you know. If you can’t make it to church, here’s a couple of phone numbers that might help: 855-404-HOPE (4673) or 508-586-1494.

A new event begins at the Martha’s Vineyard Hospital chapel next weekend, Fruit of the Vine — Meditations on the Spiritual Journey for Healing and Growth on Saturday, Jan. 26, at 4 pm. An interfaith service that incorporates song, dance, music, and sharing, the event will continue every last Saturday of the month at 4 pm.

If you have news for Have Faith, email it to connie@mvtimes.com. 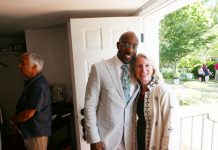 Have Faith: Principles in politics