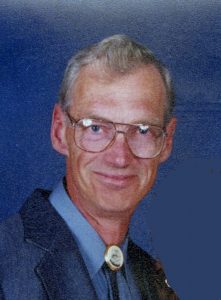 He was born July 5, 1945, in Texas to James C. Jr. and Corinne Cage. Jim married Susan Phillips in Oak Bluffs in September 1994. He was previously married to Jacque Cage in Tisbury. In July 2000, he retired from the Oak Bluffs Police Department. In 1992, Jim opened the business Rose Bud Balloons in Oak Bluffs. He was a talented artist and photographer; he won ribbons from the Martha’s Vineyard Agricultural Society and the All-Island Art Show. His note cards can be found at Rose Bud Balloons in Oak Bluffs.

As a police officer, he was often perceived as stern. He was a wonderful man once you got past the stern exterior. Jim wasn’t shy about voicing his opinions even when others didn’t agree; some people would say he didn’t play well with others. He made life interesting, and had a great sense of humor. Boating, art, stargazing, and friends were things he loved. He enjoyed celebrating holidays with costumes and his outdoor inflatables. You never knew what he would be wearing — masks, hats, light-up necklaces, or his ostrich costume. He loved his family and New England Patriots. He would look forward to going to Offshore Ale to share stories with his friends and have a beer. May the memories of Jim be happy ones. Don’t be sorry; share a positive thought with his family.

A memorial service and celebration of life will be announced later. Chapman, Cole and Gleason has care of the arrangements. Memorial donations can be made to a charity of your choice. Visit ccgfuneralhome.com for online guestbook and information.