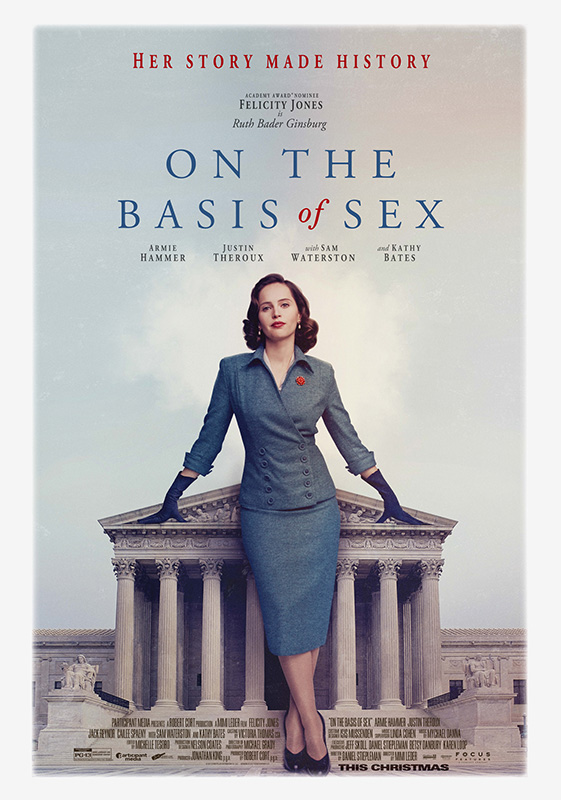 Round 2 in the well-earned cinematic celebration of Ruth Bader Ginsburg, “On the Basis of Sex,” is coming to the M.V. Film Center. Mimi Lederer, known primarily for her TV work, directs, and Ginsburg’s nephew, Daniel Stiepleman, wrote the screenplay. The documentary, “RBG,” played at the Film Center last year, the 25th anniversary year of Ginsburg’s appointment to the Supreme Court.

British actress Felicity Jones, an Oscar nominee for “The Theory of Everything” about physicist Stephen Hawking, stars as Ginsburg. Armie Hammer (“Call Me by Your Name”) plays her loyal and supportive husband Marty.

Unlike “RBG,” which outlines Ginsburg’s life so far, “On the Basis of Sex” zeroes in on the 1972 case that initiated the overturn of years — indeed centuries — of sex discrimination law. Argued in the 10th Circuit Court of Appeals, Moritz vs. the Commissioner of Internal Revenue was distinctive for involving sex discrimination against a man. Charles Moritz was denied a $600 tax deduction for help in his invalid mother’s care.

The film begins much earlier, when Ginsburg enters Harvard Law School in 1956, one of nine women among 500 students. A Cornell graduate, she is already married and a mother. The discrimination she faces starts at Harvard, where professors refuse to call on her and suggest she is taking a slot that should go to a man. When the law school dean (Sam Waterston, an Oscar nominee for “The Killing Fields”) invites the incoming women students for dinner, he asks each of them why they chose law school. Ginsburg responds, “So I can be a more patient and understanding wife.” Although the movie doesn’t indicate it, Justice Ginsburg apparently was mortified by her answer.

Family plays an important role in “On the Basis of Sex.” A hard-working and successful law student, Ginsburg also supports her husband when he suffers from testicular cancer. She attends his classes as well as her own, and takes over the family duties he had been overseeing. Illustrations of the rampant sex discrimination of the era continue when Marty lands a job as a tax lawyer at a prestigious New York law firm. Ruth, who finished her degree at Columbia Law School, doesn’t receive a single offer, told in one case it would upset the firm’s wives. She ends up teaching sex discrimination and the law at Rutgers, replacing an African-American professor, with the university thinking a woman would be an acceptable alternative.

Marty drops the Moritz tax case on his wife’s desk, and the two are off and running. She asks a reluctant Mel Wulf (Justin Theroux), national legal director of the ACLU, to support the case. Kathy Bates shows up as feminist civil rights lawyer Dorothy Kenyon, the one who persuades Wulf and the ACLU to join the suit. Now a teenager, Ginsburg’s short-skirted daughter Jane (Cailee Spaeny) pushes her mother toward greater activism. Jane skips school to attend a Gloria Steinem rally. When the two are catcalled by construction workers and Ginsburg suggests ignoring them, Jane instead retorts, “Do you kiss your mother with that mouth?” Although the movie perhaps overplays Jane’s role, the point is clear that Ginsburg sees how changes in society have outpaced the law. During the Moritz arguments, a judge observes that the word “woman” does not appear in the Constitution, and Ginsburg replies the word “freedom” doesn’t either. It’s a powerful moment.

The director does not condescend to the viewer, spending plenty of time on the legal ins and outs of the Moritz case. Both Jones and Hammer provide strong performances. But Jones’ sweet features and interpretation of Ginsburg as more hesitant than she probably was at the time undercut Ginsburg’s real-life steely force of character. Nevertheless, Ginsburg watched the film three times and praised it. “On the Basis of Sex” is a worthy bit of history about one of the greatest legal minds of our time. It’s a good choice for the whole family.

Information and tickets for “On the Basis of Sex” and other films playing at the Film Center are available at mvfilmsociety.com.