Every Wednesday at 6:30 pm, a different Island chef is taking over the Ritz kitchen. The pop-ups started on Jan. 9, and have already become a weekly winter go-to on Circuit Avenue. Vanessa Sabee was the first chef to bring her taste to the Oak Bluffs bar and restaurant. It wasn’t your regular January shoo-in — the place was packed. Ritz manager Kelly Feirtag called the first two weeks “Insane.”

Sabee moved to Martha’s Vineyard two summers ago, and this is her first winter on-Island. She’s a sous-chef at Sweet Life, and works in the bakery at Morning Glory Farm. Wednesday was her first time occupying the Ritz kitchen.

“I feel pretty comfortable in any sort of cooking environment,” Sabee said in an interview with The Times. “It’s just familiar territory for me.” She crafted a special menu for the kitchen pop-up. It included four starters, three entrées, and two desserts.

“Surprisingly to me, the beet salad was super-popular,” she said. “We sold out about an hour and a half in.”

She described her theory and thought behind the menu, “I wanted it to be as easy to execute as possible, without sacrificing taste, flavors, and quality of the products. I wanted to do elevated bar food. I wanted to play to the strengths of the Ritz as well as showcase mine.” The menu was also a homage to Kansas, Sabee’s home state.

Next to Sabee in the kitchen was Morning Glory pastry chef Korilee Connelly, whom Sabee recruited for the night, and Ritz kitchen manager A.J. Tucker.

“The three of us hadn’t worked together before,” Sabee said. “Korilee’s never been on a line at a restaurant. It couldn’t have gone better.”

Sabee cooked for 80, and that’s about how many plates she served.

“My numbers were pretty spot-on. It was just awesome,” Sabee said. “I can’t wait to do another one, wherever and whenever it might be. It’s good to know I’m capable of doing something like this, and it’s good to feel reassured I’m out there doing the right thing in life.”

An authentic night at the Ritz isn’t complete without an appearance by Johnny Hoy and the Bluefish. Rest assured, they’re performing every Wednesday at 8 pm through Feb. 13, which is the last scheduled Kitchen Pop-Up for the winter.

Next week, Wednesday, Jan. 30, dine with West Tisbury native and chef Everett Whiting. He, and maybe one other cook, will be in the kitchen, serving up a marathon of beef, chicken, and vegetable pho, as well as dumplings. “I’ll keep it simple,” Whiting said.

Whiting has worked in the Sweet Life kitchen, as well as with Tim Larsen at Local Smoke years ago. He’s mostly working solo now, but has cooked barbecue in the Ritz kitchen before.

The chef has yet to be announced for Wednesday, Feb. 6, and on Feb. 13, the series closes with a menu by Backyard Taco.

For more information on the Ritz and Kitchen Pop-Ups, visit theritzmv.com or call 508-693-9851. The Ritz is located at 4 Circuit Ave. in Oak Bluffs. 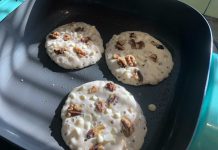