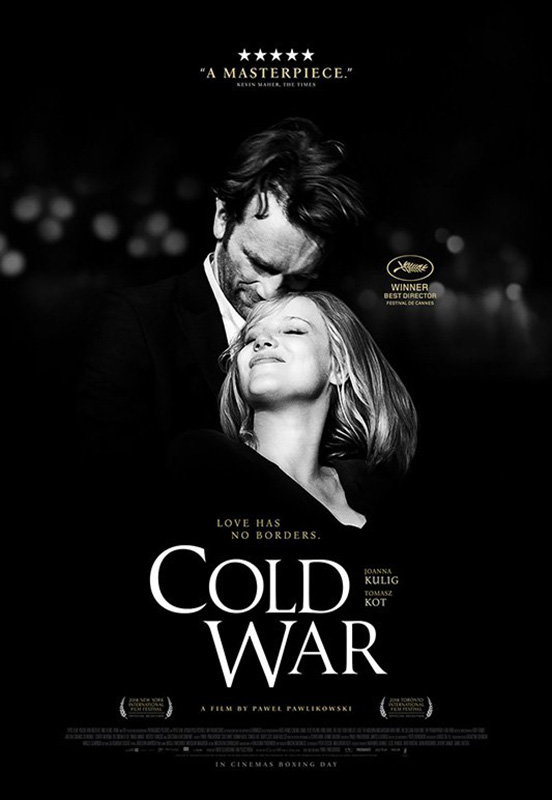 Opening Friday, Feb. 1, at the M.V. Film Center is Pawel Pawlikowski’s “Cold War.” This black-and-white Polish film has earned Oscar nominations for best foreign film, best director, and best cinematography. In addition, Pawlikowski won the best director award at Cannes, and was nominated there for the Palme d’Or. Set in post-war Poland, the aptly named “Cold War” tracks the passionate affair of Zula (Joanna Kulig) and Wiktor (Tomasz Kot) in a story based on the director’s parents of the same names.

Music plays an important role in the film, in many ways more so than dialogue. The narrative proceeds through a series of blackouts, where the time and location shift. The film opens in 1949, as the camera pans across a series of ragged peasants playing instruments and singing. Then it follows Wiktor and his colleague and lover Irena (Agata Kulesza), while they search the Polish countryside for singers and dancers. As music director of the country’s youth folk ensemble, Wiktor has been assigned by the Communist state to put together a troupe to play throughout Poland. The camera pictures him recording and interviewing with Irena the people who audition for him. When 19-year-old Zula shows up, he is instantly smitten. He learns that she’s not a simple mountain girl like the others auditioning, but is on parole for knifing her father. “He mistook me for my mother, so I showed him the difference with a knife,” she tells Wiktor in a singular, striking piece of dialogue.

After dance rehearsals, the scene shifts to Warsaw in 1951, where the troupe performs in full ethnic regalia, and Zula and Wiktor have become lovers. What begins as performances of folk music turns political. Thanks to Kaczmarek (Borys Szyc), the apparatchik assigned to the troupe, it starts carrying messages about land reform and world peace with a giant picture of Stalin in the background. The lovers’ relationship turns political as well, when Zula confesses that she has been informing on Wiktor to Kaczmarek. The next performance is in Berlin, and Wiktor makes plans to escape with Zula for Paris, where he will play piano with jazz groups. But Zula doesn’t show up. In 1954 they reunite in Paris, even though each has acquired another lover. A later meeting in 1955 happens in Yugoslavia, where Zula has become the star of the troupe, but Wiktor is hustled onto a train to Paris by two henchmen. By 1957 the two meet up again in Paris, where they perform together, even though Zula has married an Italian. Once Zula disappears back to Poland, Wiktor, determined to find her, heads there in 1959.

While jazz in Paris remains a primary musical theme along with the troupe, other musical motifs show up. A drunken Zula dances on a bar to Bill Haley’s “Rock Around the Clock.” Another time she sings with a Mexican band. The film’s ellipses in time require the viewer to fill in the gaps in the same way they must understand the lovers’ passion for each other, not through what they say as much as how they look at each other and interact physically. Ignoring conventional ways of storytelling, “Cold War” works as an exquisitely visual film, framed, lit, and edited like a series of shadowboxes animated by music.

Information and tickets for “Cold War” and other films playing at the Film Center are available at mvfilmsociety.com.