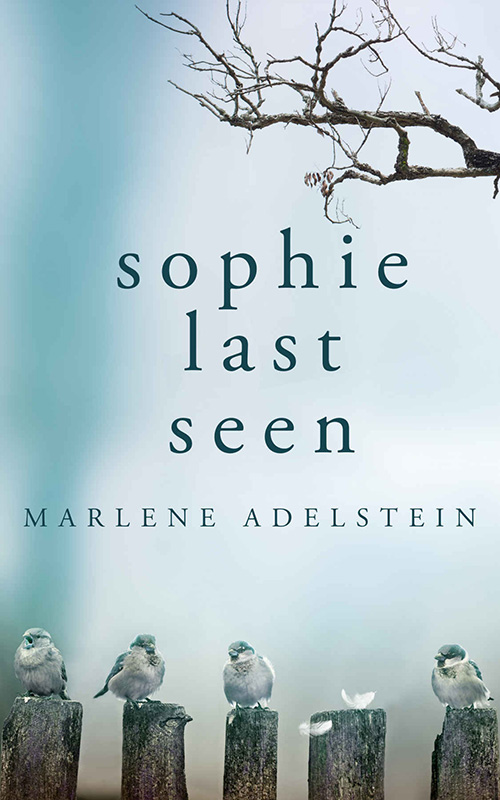 The central character in Marlene Adelstein’s book isn’t even there. Six years after losing her daughter Sophie, her mother Jesse’s entire life revolves around finding her. She has not moved on and, in fact, simply moved inward, dropping friends, social engagements, her art, and losing her husband and then lover, employment, and pretty much what anyone would call sane behavior.

Jesse’s daughter Sophie was not an easy child. She was bright, creative, moody. Author Marlene Adelstein writes in the book, “She was sensitive to everything. If it was too sunny, it could freak her out. Or if a piece of clothing wasn’t just right. If it was corduroy and she wanted cotton, she’d flip. Blue not purple, freak-out.” And a freak-out could look like this: “Legs, arms, fingers, darting, jabbing, flailing, grabbing at whatever was in her path. Lamps on tables, pictures on walls, hair on a parent’s head. She erupted into a full-blown tantrum. Screeching, kicking, hair flying, tears. A wild-child rage.”

Asked why she chose to make Sophie a “trying” child, Adelstein, who summers in what was her grandmother’s cottage in Oak Bluffs, replied, “Whenever you see the photos of missing children, they are always smiling and look so good and sweet, like the happiest kid on the block. I wondered … what if this child wasn’t so perfect? If she wasn’t at all like her smiling photo. I wanted to make her and the story more layered. So, I made her ‘difficult,’ but also with special gifts. A spirited child.”

One of Sophie’s exceptional qualities was her full-blown dedication to studying and learning about birds. In fact, the bird theme runs throughout, from the front cover to the central importance of both Sophie’s birding journals and “Bixby’s Birder’s Bible.” Jesse reads its instructions as messages for how to look for Sophie: “To find birds, you must pay close attention and be patient. Stop. Wait. Watch. And most of all … listen. Bixby’s Birder’s Bible became her Bible, and she carried it with her everywhere.”

Adelstein had a reason behind the bird theme. “I was actually on the Vineyard at my cottage, and saw a homeless man who was sleeping on the beach every night. He became [a] character in the book as I watched him every morning. I became obsessed, and started watching him with my binoculars. He had an elaborate routine every morning. It occurred to me that I was watching him as if he were a bird, and eventually, I took my own actions and gave them to Sophie. I developed it into her passion.”

Adelstein installs the intriguing character of Star, who had been Sophie’s “blood sister” and best friend. Before Sophie’s disappearance, Star and Jesse were also close, but their relationship drastically changed after “that day,” as Adelstein always refers to the day she lost Sophie. Star is severely damaged by her best friend’s original disappearance, but even more so by Sophie’s visitations that haunt her night and day.

For Adelstein, the initial inspiration was the case of a missing boy, Etan Patz, in Soho, in New York City back in 1979. “Only last year or so was there a conviction. But he was never found. I had recently moved to the city, and the posters with his smiling face were everywhere. And then as the case dragged on and on … for so many years, I just thought about his poor mother and how one could move on from something like that. That was the jumping-off point.”

Adelstein said that though the subject matter of “Sophie” may not appeal to all readers, they’ll find this story is not typical. “The subject may not initially appeal to some people … a child goes missing … but this story does have layers, and a mystery that is different than your typical missing child case. I liked the idea of Sophie leading her mother, in a way, to what happened.”

“Sophie Last Seen” takes you on a journey through her characters’ inner beings, whom you get to know as the mystery of her enigmatic “missing” central character unravels.

“Sophie Last Seen” by Marlene Adelstein, Red Adept Publishing, 2018, 302 pages. Available online as an ebook and paperback for $14.99. Ask your local bookstore to order it, or there are links on Adelstein’s website, marleneadelstein.com, for various online bookstores.