David N. Brown, an artist who loved jokes, family, and friends, 83, died of natural causes on Feb. 6, 2019, in Tucson, Ariz., with his longtime partner Nia Clark at his side. 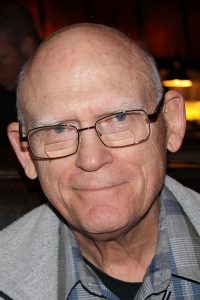 David was born in Philadelphia, Pa., and grew up in nearby Haddonfield, N.J., where he attended high school. After some time spent in art school at Lafayette College, David served in the U.S. Army, where he attended the Defense Language Institute Foreign Language Center in Monterey, Calif. David became fluent in both German and Russian in service of our country, and loved to share phrases in both languages throughout his life.

David moved with his then wife, Jane (Convery) Brown, to her hometown, Edgartown, on the Island of Martha’s Vineyard, in the early 1960s. During his more than 30 years as a resident of the Island, David was a friendly face to many Islanders and visitors, first at the Harborside Inn, and then at the Edgartown National Bank, where he retired as vice president in the mid-1990s. He was quick to offer silly jokes and funny stories, and remembered dozens of them at any given time, most often making fun of himself, not others. He also loved hearing jokes and funny stories, sharing his wonderful laugh with everyone willing to tell a story.

Following his move to Tucson, Ariz., in the late 1990s, David spent his time on one of his first loves, painting. He was a very talented artist, exhibiting and selling his beautiful works at the Old Sculpin Gallery in Edgartown, the Granary Gallery in West Tisbury, and Desert Artisans Gallery in Tucson, to name a few. David’s seascapes and desert scenes were so realistically rendered that they often could be mistaken for photographs, while his more abstract works could invite an array of different emotions and thoughts.

David was a longtime member of AA, where he provided support and care for so many in need on the Island and in Tucson.

David is survived by his partner, Nia Clark; his children, Patricia Brown Fugée and William Jeffrey Brown; his stepchildren, Lynda Hathaway, Dana Gaines, and Warren Gaines; many grandchildren and great-grandchildren; and his first wife, Jane C. Brown. David was preceded in death by his former wife, Alice (Gaines) Brown, and his brother, William (“Bill”) Brown.

David’s family is honoring his wish not to have a formal service (he donated his body to the University of Arizona Willed Body Program), and will instead celebrate his life, regularly and often. Condolences, memories, jokes, stories, pictures, etc., may be shared via the memorial website for all friends and family at InMemoryofDavidBrown.com or by email to ForDavid@colefugee.com. In lieu of flowers, donations may be made to the Semper Fi Fund, 825 College Blvd., Suite 102, PMB 609, Oceanside, CA 92057, or https://semperfifund.org, the Martha’s Vineyard Art Association, 58 Dock Street, P.O. Box 761, Edgartown, MA 02539, or https://oldsculpingallery.org, or the charity of your choice.