Gay Head, today known as Aquinnah, was the last town in the commonwealth of Massachusetts to receive electricity. Up until 1951, there had been a few gasoline-powered generators, like the one powering the town hall, but those less fortunate lived in homes lit mostly with kerosene lamps.

The Aquinnah Club, a Gay Head women’s organization, led the fight to convince the Cape & Vineyard Electric Co. to invest $22,000 to extend the power lines to the westernmost end of the Island. Club member and Gay Head native Esther (Ryan) Kestenbaum is credited for the successful initiative. The final switch was pulled on Valentine’s Day, 1951, and the whole town turned out for a festive party at the town hall, as ranges, radios, irons, washing machines, and a couple of televisions could now be powered up across town.

Some feared that electrifying the town would attract real estate developers. “Just imagine all of Gay Head covered with little Summer cottages,” lamented Lorenzo Jeffers, a Wampanoag resident, to a Boston Globe reporter. But the newspaper went on to note that land had already reached prices as high as $1,000 an acre, up from as little as $50 an acre only a few years earlier, and that notable summer people such as radical writer Max Eastman and his wife, Russian dancer and painter Elena Krylenko, had already settled in town. (Ironically, another famous new up-Island resident who had chosen to summer in an area without electricity or piped water was David Lilienthal, chairman of the U.S. Atomic Energy Commission, the agency tasked with expanding the civilian use of nuclear power.)

“Now that Gay Head has electricity, the Chamber of Commerce will be able to put floodlights on the famous colored cliffs next Summer, for the benefit of passing yachtsmen,” gushed the Globe the next day. By the following year, plans were enacted to replace the old kerosene-powered lens system in the lighthouse with an electric light.

Curiously, telephones predated electricity in Gay Head by about half a century. As early as 1887, there were reports of a government telephone line connecting Gay Head to Vineyard Haven, although this may have been an optimistically premature report, as military exercises in 1902 were forced to rely on heliographs, flash lanterns, and rocket signals to communicate with the Gay Head station in lieu of a phone.

But by 1907, there were not one, but two competing phone systems serving Gay Head — the New England Telephone and Telegraph Co., which would later hold the monopoly, and maverick Dr. Charles Lane’s local startup, the Public Telephone Co., based in Vineyard Haven. (Presumably there were two separate sets of lines and poles to Gay Head by 1907, neither electrified.) In 1911, a petition was signed by Gay Head phone subscribers requesting a reduction in the rate charged on “farmers’ lines” by the former company, as calls were charged by the mileage over six miles (virtually anywhere, from Gay Head). It was denied.

In 1955, the first dial phones were installed in Gay Head and Chilmark, and the old hand-crank system was retired. The two towns were assigned the central office name “MIssion 5,” or (64) 5, on an old rotary dial, an arbitrary name chosen by the company. 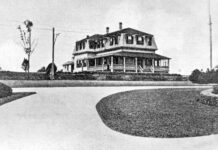 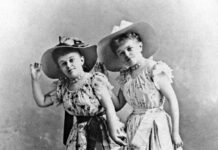