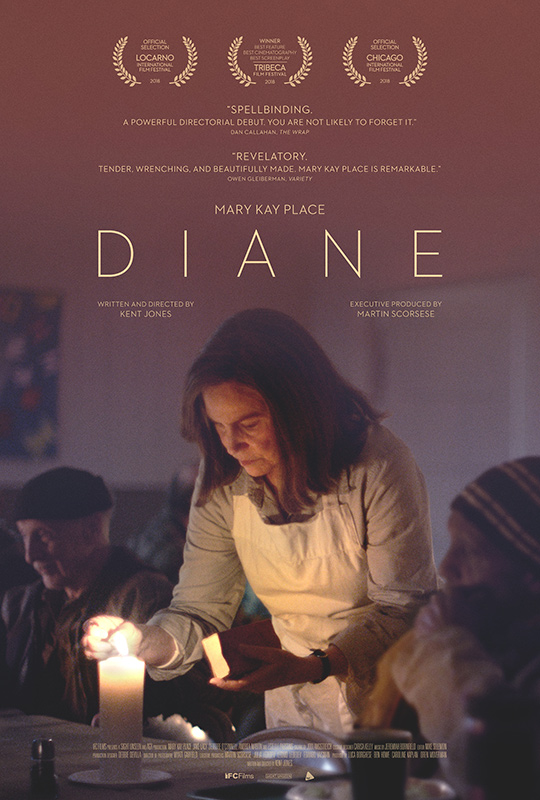 Kent Jones, head of programming at the New York Film Festival and Martin Scorsese archivist, has written and directed his first fiction film, “Diane,” playing now at the M.V. Film Center. According to the director, “Diane” is based on his plucky and close-knit great-aunts.

Mary Kay Place, with a long career of important if underrated roles, most recently in “Big Love,” plays Diane, an aging widow who lives in small-town Western Massachusetts. An outstanding and seasoned cast supports her, including Oscar winner Estelle Parsons as Mary, Andrea Martin as Bobbie, and Deirdre O’Connell as Donna.

Like Diane, these women are entering their twilight years. They are plain folk — not celebrities — leading ordinary lives and heading toward the end. Diane’s cousin Donna is hospitalized with terminal cancer, and Donna’s mother Mary remarks that she doesn’t have much longer to live either. Elderly Aunt Ina (Phyllis Somerville) still smokes incessantly. The only significant male among Diane’s many female friends and family members is her drug-addicted son Brian (Jake Lacy).

Diane’s busy, vital life consists of helping others. The film opens catching her uncharacteristically asleep in Donna’s hospital room, then waking up shocked and apologetic. The message is that she rarely takes time for herself. The two women play gin rummy and reminisce, tellingly, about the time Diane left a young Brian with Donna to pursue an adulterous affair. It’s not a happy memory, and one that haunts Diane, suggesting her underlying need to help others. She volunteers in a soup kitchen, joins gatherings of family and friends, and visits Brian with supplies of food and clean clothes.

“How is Mario’s shoulder?” she’ll ask, or checks in on Al, who’s recovering from surgery. Or she brings a casserole and gets one in return. The film is filled with the small, very real moments that make up ordinary lives. Car trips from one friend or family member to the next create the film’s transitions, sometimes from one hour to the next and other times for weeks or more. Note-taking helps Diane keep track of what’s happening to whom and who’s ready for a visit. It also becomes a way to reveal her feelings. Underlying Diane’s day-to-day life is a mournful, almost religious, soundtrack of glass armonica and organ music.

Diane is always on the go, but the people she cares about are dying. When Brian disappears, she fears the worst, until he shows up, apparently recovered, with his fundamentalist wife, and they try to convert her. A trip to a bar finds a lonely Diane getting drunk on margaritas, playing Leon Russell and Bob Dylan on the jukebox and dancing by herself. In a reminder that Diane is not as alone as she may feel, the bartender makes a phone call to family members to come get her before she passes out or hurts herself.

Why watch such a sorrowful meditation on mortality? A powerful script and good directing count. But Mary Kay Place offers the most compelling reason.  Her inspiring performance gives life to the truth that everyone eventually faces death.

In this age of celebrity worship, the director has risked a great deal to give the viewer a portrait of such a commonplace, if admirable woman. A stand-in for the viewer, Diane is facing not only the loss of life in family and friends but ultimately in herself. The movie reminds us that the bodies old people live in are the bodies of former young ones.

Information and tickets for “Diane” and other Film Center films are available at mvfilmsociety.com.