Joyce R. Duarte, 85, of Waterford, Maine, died Saturday, April 13, 2019 at Maine Medical Center in Portland with her daughter at her side. 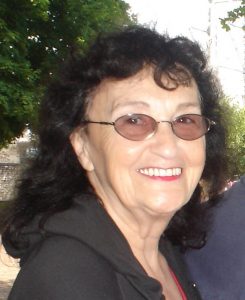 Joyce was born in Vineyard Haven on August 13, 1933.  She was the third of four children born to the late Argie A. Humphreys and Bernice (Mayhew) Humphreys.

Joyce spent her early years growing up in Vineyard Haven. She had a close relationship with her brother Bartlett and her two sisters Bernice, and Rosalie. She fondly told stories to her children about Taggy, a beloved dog who followed them everywhere even when he wasn’t supposed to go. Hence the name…Taggy. She also helped in the family business when her father Argie opened the Vineyard Foodshop on Main Street in Vineyard Haven in the early 1950’s. Later, during high school, the family relocated up-Island to North Tisbury into the Mayhew family home on State Road. Argie built a little bakery next to the house where they moved the Vineyard Foodshop business.

Joyce and Merrill, who was in the Navy, lived in Rhode Island near Quonset Point Naval Air Station, where he was stationed at the time. Their daughter Linda H. Warren (of Somersworth, NH) was born there on the naval base. After the Navy, they moved to North Amherst where Merrill was attending the University of Massachusetts for both bachelor’s and master’s degrees. Joyce was a wonderful homemaker. Their son Michael R. Hoyle (of Alfred, Maine) was born there in North Hampton. A while later Joyce then moved with the family to Laconia, NH. She continued being a full-time mother, but also had many outside interests. She joined a women’s bowling league and sang in the local “Sweet Adelines” chorus group. Every summer the family spent the whole season with her parents back on the Vineyard at the family home. The family had camps up at Lobsterville Beach and Joyce loved to spend hours walking along the beach with her children and later her grandchildren. They searched for fossil shark teeth and shells.  Joyce had sharp eyes and always found the biggest and best shark teeth.

She also worked at the family bakery again while she spent those wonderful idyllic summer days on Martha’s Vineyard.

In 1965 Joyce and her family moved to Lee, NH, near the University of New Hampshire. Joyce worked in retail clothing for several years. She then went and obtained her real estate license, working for the Irene York agency in Dover, NH  She loved working in real estate and made many friends during that time.

In 1970 Joyce returned home to Martha’s Vineyard after separating from Merrill. Later after divorce, she met and married David Duarte of Vineyard Haven. During their years together, they traveled thousands of miles across the country. They loved to drive to Florida, Texas, Arizona and California. Joyce started working with her sister Rosalie at the Bayberry Inn in West Tisbury.  She joined her sister’s rug hooking school and started making some beautiful creations. She continued rug hooking until her passing. She also loved to do flea markets and antique shows with her friends and family.

In 2001 she moved permanently from Martha’s Vineyard following her second divorce. She bought an antique Cape-style home in Waterford, Maine. At age 68 she took up ballroom dancing in Portland. She competed all over New England and New York and places as far as Montreal and the Caribbean. She frequently won in her age group.

In 2014 after she had a mild stroke she had to give up dancing, but she always loved music, playing piano, going to concerts, and more, which she continued to do.

She was beautiful inside and out. She had a joyous spirit, was friendly, and loving. She will be missed very much by her family.

Joyce was preceded in death by her parents Argie and Bernice Humphreys and by her older brother Bartlett M. Humphreys.

A graveside service will be held at 1 pm on Sunday April 28, at the West Tisbury Cemetery, followed by a celebration of life at the home of Rosalie Powell at 49 Old Courthouse Road, West Tisbury.

Family and friends are invited. Memorial donations or flowers may be sent in care of James Powell at the same address, or to PO Box 654 West Tisbury, MA 02575.