The Martha’s Vineyard Shellfish Group’s annual Extravaganza is all about “bivalves and blues,” as Tisbury board member Beau Begin put it. He stood behind a spread of littlenecks on ice at the beginning of the evening, with oysters from Sengekontacket Pond to one side. Across the way were more locally cultivated oysters, all spawned in the Shellfish Group’s hatcheries. Bivalves — oysters, clams, and scallops — are a big part of the Island’s seafood economy. “Towns pay into the shellfish group, and each town gets an allotment for the types of shellfish they can grow,” explained Chilmark shellfish constable Isaiah Scheffer, as he shucked Spearpoint oysters grown by his brother and father. “There wouldn’t be a lot of shellfish here without these guys.”

Rick Karney, emeritus director of the group, started spawning oysters in the 1970s. At the beginning of 2017, he partially retired, and Amandine Surier Hall and Emma Green-Beach took over as co-directors. “They’re just as passionate about it as I was,” said Karney. He then pointed out the lavish spread of silent auction items, many of them shellfish- or ocean-themed, including charter fishing, wampum jewelry, an oyster baking dish, art, food, and more. “It’s just unbelievable, the generosity of everybody,” he said. Board member Juli Vanderhoop, from Aquinnah, donated a private pizza party from her Orange Peel Bakery. “I scallop all winter long,” she said. “We’ve got to keep that pond in good shape.”

As with most Island gatherings, there were many familiar faces, but others were attending the party for the first time. They enjoyed chowder from Larsen’s Fish Market and delicious locally cultivated oysters, washing them down with beer and wine donated by many local businesses. The Shellfish Group sold T shirts and tote bags designed by Amandine Surier Hall with their old slogan, “We Spawn Millions,” which was a spoof of the McDonald’s chain’s advertising. Sonja Josephson, at the T shirt table, came here from Finland, and started as an intern at the shellfish hatchery last summer. “I never thought I’d end up staying here,” she said, “but it’s a beautiful Island and I love working on the water.” She also commented on the impressive size of the crowd: “It’s great to see so many people show up to support something like this.”

At seven o’clock, Johnny Hoy stepped up to the mic and the Bluefish started playing. It didn’t take long to warm up the dance floor. The chowder ran out and oysters were slurped up faster than they could be shucked, but there were, as Amanda Dickinson put it, “a lot of geezers dancing.” The silent auction closed at nine o’clock. The event was a great success, with more than 200 people attending. “The turnout was great, we got cleaned out of chowder and oysters, which hasn’t happened before. People came hungry for shellfish,” Surier Hall reported the following day.

The Shellfish Extravaganza is an annual event, so look for it again next April, and come prepared to slurp oysters and dance the night away. 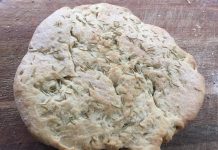