Jane was born on Sept. 15, 1925, in Albany, N.Y., the daughter of Marie Connick Welch and Francis James Welch. She graduated from the College of Saint Rose, and received a master of arts degree from Oneonta State Teachers College. After graduation, Jane taught elementary school in Albany. 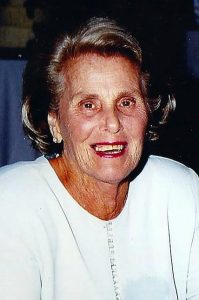 Jane met her future husband, Henry, while working one summer on Martha’s Vineyard. They were married on Oct. 31, 1952, in King’s Lynn, England, where Henry was completing his commitment as a Fulbright scholar.

Upon their return to the U.S., Henry and Jane settled in North Andover, where they raised their family and Jane resumed her teaching career. Each summer they returned to Oak Bluffs, and stayed at Mr. Shelley’s parents’ cottage on Tuckernuck Avenue. In 1965 they purchased their home in the Vineyard Highlands.

Once Henry and Jane retired, they split their time between their homes on Martha’s Vineyard and Naples.

Jane will be remembered most for her love and strong commitment to her family. She enjoyed spending time with her children and grandchildren. Jane had many friends, and enjoyed socializing and entertaining. All who knew her will remember her wonderful sense of humor and distinctive laugh.

Jane was an avid gardener, and won numerous awards for floral arranging both on the Vineyard and in Naples. She was a member of the Martha’s Vineyard Garden Club, East Chop Beach Club, and for many years volunteered at the Polly Hill Arboretum. A lover of the arts, she volunteered for many years at the Philharmonic Center in Naples. Jane also enjoyed working at All Things Oriental in Vineyard Haven during her retirement.

She is survived by her son, Henry C. Shelley Jr. and his wife Elizabeth Dean, of SiIver Spring, Md., daughter Mary Elizabeth Shelley and her husband Tom Downs of Naples, Fla., son Francis W. Shelley and his wife Margaret, of Sudbury, and son Mark J. Shelley of Kingston; eight grandchildren, Jane, Grace, Mary Kate, Ryan, Patrick, Matthew, Rose, and Connor. She is also survived by her sister, Elizabeth Anne Deyo of North Andover and East Chop, and several nieces and nephews. She was predeceased by her husband of 57 years, Henry C. Shelley, and her brother Francis Welch.

Funeral arrangements will be announced at a later date. Memorial contributions may be made to Martha’s Vineyard Community Services, 111 Edgartown Rd., Oak Bluffs, MA 02557.