Jerry Davies Millett, 80, of Port St. Lucie, Fla., and West Tisbury, died on April 5, 2019, in Port St. Lucie from a heart attack. Jerry had a longstanding history of cardiac issues. Thankfully, Jerry maintained an active life until his passing. At the time of his death, his youngest son, J. Davies Millett, was living with him in Florida. 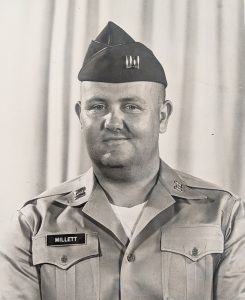 Jerry was born in Newton to Stella Mayhew Davies Millett and James Millett. As a young boy, he spent his time in Needham, and the family property of Glimmerglass, off Middle Road, in West Tisbury. As a young man, he enjoyed fishing, gardening, and raising prize poultry on the Island. During his summers at Glimmerglass, Jerry worked for Louis Greene at Hillside Farm, the Fishers at Flat Point Farm, and the Fergusons at Arrowhead Farm, Indian Hill, and Everett Poole of Menemsha. His love of farming carried over into his adult life, as he proudly produced the earliest tomatoes in Framingham. He played softball every Sunday in Mrs. Toomey’s field in Chilmark, and enjoyed a wide circle of friends. He loved fishing, beach parties, card-playing (especially poker, bridge, and cribbage), and the usual summer activities on the Vineyard. Jerry’s college and summer friends included Dan Cabot, now of West Tisbury, a frequent visitor at Glimmerglass, where Dan met, fell in love with, and married Jerry’s cousin, Nancy Pardy. Jerry was best man at their wedding.

Following his graduation from Needham High, Jerry attended Northeastern University, where he majored in industrial engineering. Upon graduation, Jerry was commissioned a 2nd lieutenant in the Army Corps of Engineers. While he was planning to complete his officer training and continue in the reserves, Jerry was called to active duty in the aftermath of the Cuban Missile Crisis. During his seven-year military career, he was stationed in Fort Benning, Ga., Fort Stewart, Ga., Orleans, France, and Vietnam. While he enjoyed his military career, he decided to leave the service and raise his three boys following a yearlong tour in Vietnam. For his Vietnam service, he was awarded the Bronze Star for meritorious service during combat operations. Jerry was honorably discharged as captain, and started his civilian career as IT program manager for the Honeywell Corp. Using the GI Bill, he attended Babson College and received a master’s in business administration. Jerry retired from Honeywell and enjoyed over 35 years of retirement on the Vineyard and in Florida.

Jerry was everyone’s best friend. Several of his Needham High School buddies visited him in Florida, and moved there in retirement to be near him and continue the weekly poker games they had enjoyed as young men. Jerry was a man of high intelligence and leadership skills, and made friends easily. Throughout his life he was an extraordinarily lucky man. If a door prize was given at an event, Jerry won it. If he had bought a lottery ticket, he would probably have won that as well. Jerry will be missed.

There will be a celebration Jerry’s life in late summer, with an event at Glimmerglass with his many friends and relatives. Details to follow. In lieu of flowers, we ask that memorial donations be provided to the West Tisbury Library Foundation, P.O. Box 1238, West Tisbury MA 02575.