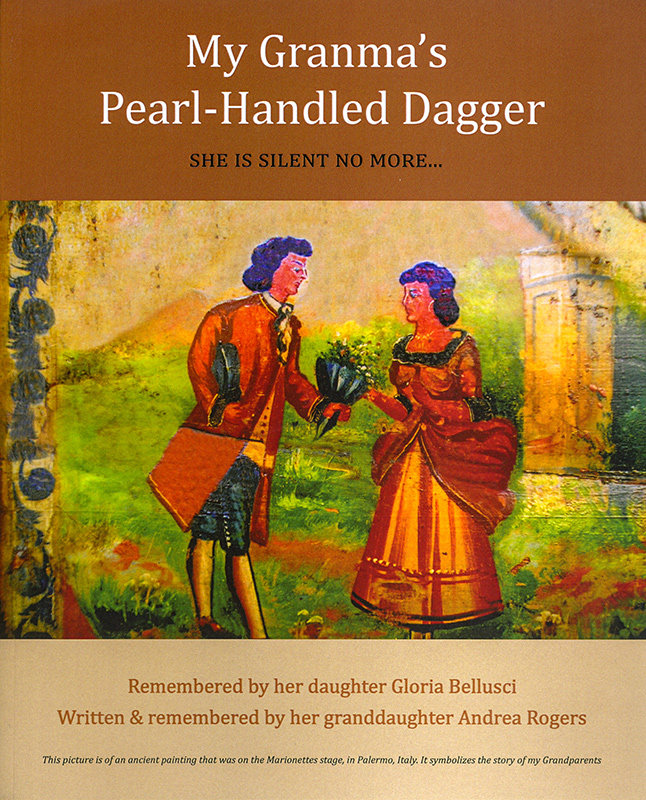 By anyone’s definition, Fifi Perricone was a rock of strength for her immediate and extended family. Andrea Rogers relates her grandmother’s tale in small snippets, each with a telling title and corresponding date that leads you through Fifi’s lifelong journey of triumph over relentless adversity in Rogers’ new book, “My Granma’s Pearl-Handled Dagger.” There was the devastating loss of her mother early on, of siblings and her own children, and abandonment by her first husband. There were violent men Fifi confronted — one with a dagger and another with a hot iron. There was the impact of poverty as well.

Rogers describes the complexity of Fifi’s nature. “She stood her ground with vicious men and treated them accordingly. She fed the hungry and healed the sick … She could laugh and jump rope like a little girl, and then sing along with the Beatles. If you went to her with the weight of the world on your shoulders, all it took was one of her hugs and a few choice words of homespun wisdom, and she’d make you right as rain again … She had only a fifth-grade education, but I think she had a doctorate in the wisdom of life.”

It took Rogers about 10 years from start to finish to write her book. She says that it began “with curiosity about my grandmother, forcing her to answer my questions. The answers to which only made me want more stories. We were extremely close; when we couldn’t see each other we corresponded by letters. As I grew older, I understood more about who she was from my older aunts. They all said the same thing about her, which was, ‘Fifi’s life story should be a book.’ She was brave and daring in a quiet way, she stood her ground, and never let anyone put her in her place. A novel idea for a woman living in the late 1800s. The fact that she endured the loss of so many infant brothers and sisters certainly led her to be a midwife at a young age. It wasn’t until I had lost loved ones myself that I really grasped the strength she gave me by her example.”

As time passed, Rogers said, her mother was 91, and it was time to tell Fifi’s story before it was lost forever. She tapped her aunts’ memories and researched the trips her parents made, coming and going to America through Ellis Island and Castle Garden. She researched census reports following through the years, and newspapers that recorded key events in Fifi’s life. Fifi herself kept photos and important papers such as gravestone receipts, Rogers’ grandfather’s petition for American citizenship, and his draft card from WWI.

“With the exception of the center picture of Mulberry Street and a few pictures of some famous people associated with stories of my grandparents, all pictures of family are the actual people, and the names have not been changed,” Rogers said of the book. “The picture of my grandfather and Richard Whitney, former vice president of the Stock Exchange, is authentic. The newspaper article about Fifi being abandoned by her husband is the actual article as written in 1908. All draft cards, birth certificates, marriage licenses, passenger records, census records, orphanage records, and death certificates are authentic. All these [items] corroborated the stories Fifi reluctantly told us. My mother helped with her own stories that she remembered about growing up with Fifi and her father.”

Rogers not only peppers the tale with reproductions of related items, but also has a distinct book cover of a couple courting from a special horse-drawn cart used in Sicily during holiday celebrations. “The front cover of the book is a picture I took when visiting Palermo,” she explains. “My grandfather Joe worked for the marionettes in the piazza, the picture is of a painting on the stage below the puppets. All the stories he told me were about the prince saving the princess from some evil. I always felt it symbolized my grandparents’ life together — he saved her from a rogue husband, and later she saved him from influenza during WWI. I felt it symbolized the loving relationship they shared for over 50 years.”

Rogers sprinkles the colloquial dialogue with Italian sayings, translated into English in the margins. “The dialogue was easy; my childhood was spent in the company of my grandparents, aunts, and uncles. Every weekend we visited my mother’s family or my father’s family,” Rogers said. “Back then children were seen and not heard. As long as I remained quiet, I was welcomed to listen. I was a story sponge. I knew how they spoke and felt very confident that I could do them justice.”

“My Granma’s Pearl-Handled Dagger,” Andrea L. Bellusci-Rogers. Mama Mia Publishing, Oak Bluffs. 245 pages. Available at Bunch of Grapes in Vineyard Haven and from the author starting Memorial Day weekend at the Grange all summer during the Artisans Festivals.