We live on a main road with many people passing by our windows each day. Our 14-month-old mixed-breed, Scout, LOVES to bark when she hears another dog passing by. It’s rarely at people or cars, and, from what our upstairs neighbors have said, never happens when we aren’t home.

Often she will be dead asleep on the couch and will make it to the window in two bounds before we can even say her name! She barks two or three times as the dog passes by and then returns to the couch and goes back to sleep.

Is this OK? It seems like she is just trying to alert us of another dog, but those two loud barks are very startling — especially while you’re just watching a movie or taking a nap!

The short answer to your question, “Is this OK?” is yes. Having trained and used two of my dogs to find missing people, I can attest to the efficacy of a dog’s hearing sensitivity. When I had a “high probability” search, meaning the missing person is very possibly still alive, every so often I would call out the missing person’s name and look at my dog to see if there was any reaction, indicating a response from the MIA that I couldn’t hear, but the dog could, and did. As for their scenting ability, we two-leggeds have about 5 million olfactory cells. Most dogs have 200 to 300 million, so when you come home and Scout smells your pants, she knows who you touched, what you ate, and what kind of environments you were in. As Mark Twain said, “If dogs could talk, nobody would own them.”

If windows are cracked open and the wind is right, there’s a possibility that Scout picked up the scent of a passing dog. But I think the likelihood is Scout is often hearing the chinking sound of tags on a collar. My own dog, Paula Jean, also gives a couple of barks when a dog passes by, and it still amazes me as I look out the closed window from the second floor and say to myself, “How does she know?”

The fact that Scout only seems to present this territorial response is when you’re home tells me she’s looking to engage you by showing off a little, alerting you to the fact that she’s aware of the possible interloper, and you’re not, oh clueless one. J and J, if you really deem it a behavior that you need to stop, you can go negative, and/or positive. Coordinate with a couple of friends to walk by with their dogs, calling or texting when they’re about to pass your windows. The split second Scout barks she hears you say “Quiet!” coupled with a sound or something that startles her. Two pots banging, a whistle, air horn, vibrating collar, whatever. On a more positive basis, I’d teach her to come to you for a treat when she acknowledges a dog having the audacity to pass by her den. John (or Jenna), you’re at the window waiting for your accomplice with dog to walk by, and just as Scout perks up, before she barks, Jenna calls her to come to her for a treat. Timed right, every time a dog passes by, Scout’s going to let you know by coming to you for a treat instead of barking. Paula Jean spends much time offleash, and for some reason, chose to enter the street to chase cars only on Greenleaf Avenue in O.B. Now she comes to me for a treat instead of going after the cars. When I’m not even cognizant of a car going by (on Greenleaf), she’ll remind me, every time!

P.S.: If this is your worst problem with Scout, you got a great dog! 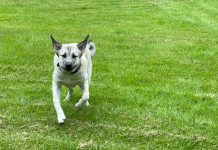 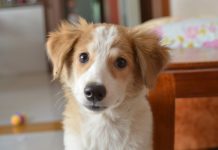 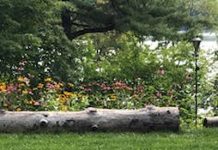