Barbara Cottle Child died peacefully on March 3, 2019, at the home of her son and daughter-in-law in Memphis, Tenn. 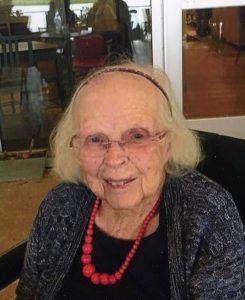 Barbara was born on Oct. 27, 1925, in Winchester to Lemyra West Cottle and Fred Raymond Cottle. She grew up in Lambert’s Cove, and graduated from Tisbury High School in 1941. Barbara attended Vesper George School of Art, graduating in 1942. Upon graduation, she returned to Martha’s Vineyard, where she worked for Van Riper’s Ship Model and Mosher Photo, where she met Edward Child. Barbara and Ed were married at the Lambert’s Cove Church on June 23, 1946.

Barbara and her husband moved to Troy, N.Y., while Ed attended Rensselaer Polytechnic Institute. Upon Ed’s graduation, they purchased a farm in Westfield, and farmed for several years before returning to Barbara’s beloved Lambert’s Cove, where they raised their three sons.

Barbara loved her community, and was an active member of the D.A.R., Martha’s Vineyard Antiques Club, and Martha’s Vineyard Doll Club, and was secretary for the Martha’s Vineyard Community Services board of directors. Barbara was an original member of the West Tisbury planning board. She also worked for Greene’s Hillside Farm and Florist as a floral designer, as well as Bunch of Grapes bookstore. After her retirement, she continued working for Joan Merry, designing and arranging wedding flowers, which she enjoyed well into her 80s.

Barbara returned to school in her 70s, earning an associate’s degree in psychology while working for United Way of Hartford.

Barbara and Ed spent over 30 years as volunteers for the American Red Cross. Ed drove an emergency response vehicle during the aftermath of 9/11, with Barbara working alongside him. Their missions included trips to Puerto Rico and Tennessee, helping with the aftermath of natural disasters. She and Ed drove their camper on four pleasure trips to Alaska. They traveled to France as well. They both enjoyed the adventure of travel and the opportunity to meet new people. Barbara’s greatest love, however, remained her beloved Lambert’s Cove, where she spent her childhood and adulthood monitoring the water, flora, and fauna.

A graveside service will take place at Lambert’s Cove Cemetery on Saturday, May 18, at 1 pm, followed by a reception for family and friends at the home of Ken Child on Holmes Hole Mail Rd. in West Tisbury.