The Unitarian Universalist Church of Martha’s Vineyard has roots in the 1700s, when itinerant preachers came to the Island, and the Stevens Memorial Chapel was built in 1896. There’s a strong Island history, but the chapel has never been the site of a minister’s ordination until last weekend. Last Saturday, May 4, the Rev. Janet Newton was ordained for ministry by the combined congregations of the Unitarian Universalist Church of Martha’s Vineyard and the First Parish Church in Berlin, where Newton serves as a contract minister. She interned at the Vineyard Haven church from 2015 to 2017 as part of meeting the Unitarian Universalist Association standards for ministerial development.

The current leader of the Island’s UU church, the Rev. Bill Clark, said that the congregation ordains its own ministers.

“In our church polity, it is the congregation that ordains a minister,” Clark explained to me in an email last week. “We have no higher ecclesiastical authority — bishops or archbishops — which have that responsibility. All of it resides with the congregation.

“So we are deeply excited in making history on Saturday,” Clark wrote. “Janet is always a delight to work with. She has a natural instinct for ministry, and brings a fresh, young voice to our ministries. It’s a day of blessings all around.”

For Newton, the idea of becoming an ordained minister in the church she’s been a part of all her life was not something that came as an epiphany. A lifelong Unitarian, Newton said she had thought about ministry in the UU church for years. We sat down for coffee at one of her “offices,” Rosewater Market in Edgartown.

“I felt like a call to ministry was this compelling need to be involved in community and live my life in service to the community,” she explained. “To accompany people through the tragedies and joys of life, I needed more wisdom than I had at age 23, so I knew this would be a thing for me in the future.”

Newton grew up in Los Alamos, N.M. — yes, the place where they created the atomic bomb. She said the small county she grew up in had the most scientists and the most churches per capita of any county in the U.S. “It’s this stunningly beautiful location, and an odd blend of destruction and tremendous beauty.”

She was raised a Unitarian Universalist by her scientist father and a mother who worked in the computer field (both were on hand for her ordination). “They were active churchgoers, and at the time, the standard UU world was very humanist, in that our essential humanity demands action on issues of equity and justice, and there’s no supernatural way of orienting.”

She taught at high schools in New Mexico and California (her wife, native Islander Maria Thibodeau, is a teacher at MVRHS and a photographer), and that led to counseling courses, but she still wasn’t doing what felt exactly right.

“I was talking to my wife, and she said, ‘You’re wearing a shirt you can’t stand, but you’re wearing it because you got it on sale,’” Newton explained. So she began to explore the idea of ministry.

She was in seminary class in Chicago when Maria called and said there was a job opening on the Island, and she wanted to move back. The past few years meant a move, a newborn, and a new career. Their daughter was born in 2016, which slowed down Newton’s studies a bit; she graduated from seminary last fall.

I like to ask clergy why they feel church attendance in the U.S. is low, with the percentage of churchgoers numbering someplace between 30 and 40 percent, closer to 30 for mainline Protestant denominations. So I asked Newton, and she had what I think is a great summation.

“My personal sort of soapbox is that we’re in the age of where people are lacking meaning in their lives, and we’re losing religious and community-building structures,” Newton said. “People are afraid to go to church … when political Christianity came into being, it changed the message.”

She said when she was teaching, she saw that everyone was worried about the knowledge the young people were gaining without considering that the whole person was involved. She said as a teacher, it wasn’t her place to address what was and wasn’t meaningful in their lives: “Parents are our primary spiritual teachers, but people are so far away from strong knowledge of their own spiritual life that we don’t have the language to say what we need. There’s this vague sense of something missing, but we don’t know how to have that missing space be filled.” People don’t want to attend church if they feel like they won’t agree with something it espouses, she said. “If I’m fed by some of what happens on Sunday, then that’s great. It’s not all about me, right?”

Now though, Newton feels like she’s in the right place. Although she said she misses the Western landscape, she loves the Island’s natural beauty too. She was looking forward to her ordination. The idea of an ordination, she said, is that “it’s about you, around you, within you, and among you.”

She said she’s still a little amazed that her calling means she can live “an intentionally conscious spiritual life.”

“Basically, I’m getting paid to live well, I mean, the blessing of ministry is the invitation to live a reflective and intentionally conscious spiritual life, and I’m sometimes shocked that I get to do this,” Newton said. “What is being asked of me is that I live fully. I think that’s not a common ask in our capitalist society.”

Congratulations to the Island’s UU congregation, and to Rev. Janet Newton and her family. I’m glad she loves her new home.

Wood Bowman from the First Congregational Church in West Tisbury sent an update regarding the 2018 CROP Walk, and news that there will be a kickoff event for the 2019 CROP Walk on Saturday, June 8, at St. Augustine’s Church, from 8 to 10 am. Breakfast will be served, and walk organizers will help provide resources to make this year’s walk as successful as last year’s;

Woody prepared the totals for 2018, and it was a banner year.

“All told, we had our best year ever, raising $25,874!” Woody wrote in an email. “Our walk was recognized as the ninth best in New England, and 65th in the country. The local grants went to the Island Food Pantry with a $5,787 grant, and to the Vineyard Committee on Hunger with $681, so the M.V. walk has a significant impact locally and globally.”

The top fundraising church was the First Congregational Church, with young Eriene Eville raising $2,050 with 33 online contributions — the most ever in online giving. She had something to say about her years of CROP participation: “I have walked the CROP Walk for many years,” she wrote. “My very first walk was when I was a year and a half old. I made it to the drawbridge by the hospital and back to St. Augustine’s Church. I’ve walked every year since then — 10 years in a row. I like being part of an organized effort to raise money to end hunger, both on Martha’s Vineyard and around the world. It’s fun to be part of a community, and I especially like the feeling when people come up to me to give a donation. It’s also been interesting to learn how to use social media to fundraise. Overall, it’s just fun.”

When it comes to fundraising, I’m pretty I’d want Eriene on my team too.

Phil Wallis, executive director of the Martha’s Vineyard Museum, will speak at the Federated Church’s next Community Partners program on Sunday, May 19, following the 10:30 am service. He’ll talk about the changes taking place on the museum property in Edgartown, as well as the new Vineyard Haven site. Call 508-627-4421, or email officefederatedchurchmv@gmail.com, for more information.

The Rev. Robert Williams at the United Methodist Church shared some news with me, and I’m going to share it with you: “A celebration of remembrance for the Rev. Arlene Bodge is scheduled for Wednesday, May 29, at 11 am, followed by a reception, all at the Chilmark Community Church, a United Methodist Church. Bodge served churches on the Island, and was a co-owner of Webb Campground. She gave scholarships to people to attend Boston University School of Theology, one of 13 United Methodist graduate schools of theology. Her background as a registered nurse gave her a deep understanding when called upon for critical situations as a chaplain at the Martha’s Vineyard Hospital. She worked and lived on ‘this piece of heaven’ for more than 40 years, and swam in the morning with the ladies at Inkwell Beach. She was a most delightful friend and colleague who provided hospitality on the Island to many clergy friends.”

If you have news for Have Faith, please email it to connie@mvtimes.com. 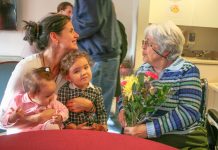 Sponsored: Real Estate Confidential: The new middle of the market