What resulted was that Schroeder discovered a quality sprinter in freshman Nick Pecoraro, who won in his first open-meet 400-meter dash, and finished second in the 100-meter dash. Pecoraro’s name has been cropping up in race results in various events for the past couple of weeks. On Thursday, he was the headliner.

“Yeah, we had a great day. We have a new dash man, did some race modeling, and got to try out people in different events,” Schroeder said. Race modeling is a live meet exercise in which runners are coached on pace, split times, and strategy as they run their events. At this time of year, it’s all about prepping for postseason competition,

Final results are not available yet, but the experimenting and low-pressure environment created a feel-good atmosphere. For example, burly Micah Vought, a shot put/discus guy by trade, finished third in his debut 100-meter race, generating high-fives and woohoos from the purple assembly.

The good news kept coming. Zach Utz returned from a seasonlong stint on the injury list to win the 800m run, going away, in his first competitive race this spring.

Enrique Contreras had personal bests in both discus and 100 meters,

The Vineyarders are prepped for the large Massachusetts State Track Coaches Association Invitational meet in Sharon on Saturday, then the Vineyarders host the Cape and Islands Championships at MVRHS next Tuesday before gearing up for postseason competition. 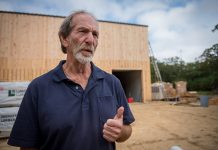 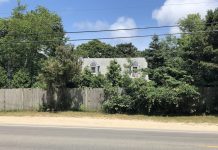