Lucy Lee Abbot, 73, of Oak Bluffs, died on May 1, 2019, in Oak Bluffs from cardiopulmonary arrest. A loving mother and grandmother, Lucy lived on the Island off and on for most of her life, returning to stay for the last 20 years. 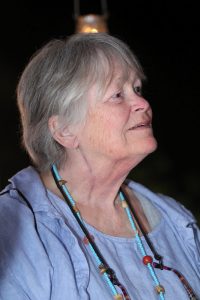 Lucy was born on July 17, 1945, to Lucy Hart Abbot and Frank K. Abbot in Albemarle County, Va. Briefly in Texas with her parents in 1955, she then attended Woodbury High School, where she edited the yearbook, and was on student council and in the Drama and Language clubs. After a brief excursion to London in 1961, she graduated in 1963.

When she was very young, she saved up to buy a horse. Her grandfather, William H. Hart, who was called “Pop,” made a deal with her — that if she saved up half the money, he would put up the other half. By the time she had saved enough for a horse, she was a teenager. So she traded her money in for a car.

While living in Bethlehem, Conn., she enrolled in Shimer College, where she received her B.A. in education and history in 1966. She taught from 1966 to 1969 in Illinois and Maryland, and then worked at Texas Outward Bound from 1972 to ’74, where she directed logistics. After brief stints at Hampshire College and Monadnock Family Services, she was the owner of Little Lyford Pond Lodge with her then husband, Joel Frantzman, from 1978 to 1988. It was a rural lodge that lacked electricity, and Lucy is remembered by her siblings for sorting out the gas light fixtures in the 12 cabins and the spring-fed water system. She mourned the untimely death of her brother Kim in 1982.

Town manager of the town of Mount Desert in the early 1990s, she moved to Jerome, Ariz., where she was the town clerk in 1995 before coming back to the Vineyard in 1997. While living on the Vineyard, she helped her mother, Lucy (Bideau) Abbot, renovate her Campground cottage in Oak Bluffs. And she had two businesses here: Genny’s Garden, and Take a Seat.

Over the past 20 years, she worked as a paralegal with Rosemarie Haigazian and Sandy Kenney. She was working at her desk there the final two days of her life.

She loved to solve problems, and ran many different businesses. She was a good observer of human behavior, and her siblings recall her excellent ability to mimic accents, and her love of photography and crafts. She took photos of seabirds doing silly things, put lovely collages together for Advent calendars, made aprons and pillowcases with her photos on them, and even won a contest. Her nephew Jesse Abbot recalled that Lucy gave him confidence as an adolescent. She had a wide range of literary and film tastes — she knew her Coen brothers, Monty Python, and Aeschylus’ “Oresteia,” and she had a generous heart.

As an older sister, she was a surrogate mother to her brother Chris, who recalled her exceedingly generous, humorous, kind, and unfailing ethical sense. She taught Chris his first chords on guitar. She loved the climate of the American West, and traveled often with her son to national parks and historic sites, including trips to Dublin in Ireland and Petra in Jordan.

In the last years of her life she traveled often to Jerusalem to see her grandchildren, and helped raise her grandson Daniel Leo Frantzman. When her doctors told her she couldn’t fly again earlier this year, she thought of ways to travel the world by land and sea.

There will be a remembrance of Lucy’s life in July for friends and family. Details will follow in another edition of this paper. Condolences to the family can be sent to P.O. Box 2550, Oak Bluffs, MA 02557.