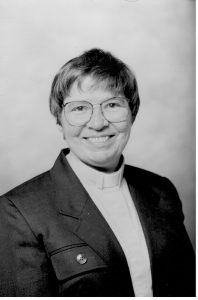 Born on Feb. 4, 1939, at Lynn Hospital, she graduated in 1952 from Phillips Grammar School in Salem. After graduation, she played for the Red Hawks basketball team, which captured the city junior championships in 1953 and 1954. Arlene remained lifelong friends with all the members of the Red Hawks team.

Arlene fell in love in with Martha’s Vineyard Island, and ended up purchasing Webb’s Camping Area in Oak Bluffs in 1971, which she and a business partner owned and operated for the next 34 years. Arlene had a deep appreciation for nature, particularly wild birds, trees, and the other local wildlife of the Island.

It was during these years that Arlene received her master’s of divinity and was ordained as a deacon and an elder by the United Methodist Church. In 1992 she was appointed to serve two churches on Martha’s Vineyard, the Chilmark Community Church and the Edgartown Whaling Church, which she did faithfully for 12 years. “I never planned on becoming a pastor,” Arlene had once observed. “I started at Andover Newton Theological School just for the love of learning. I never in my life thought I’d become a minister. But it fit like a glove.”

After retiring, Arlene moved off-Island to Brooksby Village in Peabody, where she continued her lifelong friendships and remained close with family.

She was predeceased by her mother, Ruth Camire; her stepfather, Raymond Camire; and her sister, Carol Parker. She is survived by a niece, Kathleen Shorten of Hudson, N.H., and a nephew, Russell Parker of Andover, Maine; as well as several great-nieces, great-nephews, cousins, and beloved friends.

A memorial service will be held on May 29th at 11 am at the Chilmark Community Church, with a reception to follow.