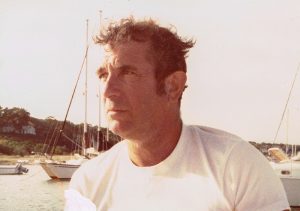 Fred was born in Chelmsford to Arthur J. Thifault and Ethel (Griffin) Thifault of Westford, the third of five children. The earliest years of his childhood were spent in Waltham, where he attended first grade before moving with his family to Marstons Mills. He was a well-liked and ambitious paperboy, initially delivering papers on foot along his six-mile route. After he saved enough money to afford a secondhand bike he was able to add enough new customers to his route to win a free trip to Fenway Park to see the Red Sox play. He often walked from Marstons Mills to Hyannis to attend the movies, a round trip of approximately 14 miles.

Fred was a veteran of both WWII, serving in the Navy, and the Korean War, serving in the Army. In 1945, at the age of 16, he left school to enlist in the Navy, where he served in the Pacific on the USS Astoria, a light cruiser making patrol runs in the Mariana Islands between Guam and Saipan. After receiving an honorable discharge from the Navy in 1948, he enlisted in the Army, serving four years in Germany in the Border Patrol along the German/Czechoslovakian border.

After his honorable discharge from the Army, he returned to the Cape, where he married his first wife, Janet Frieh. They had two children, (Eugene) Mark Thifault and Nancy E. (Thifault) Andrade. Fred moved his new wife to the Vineyard, where he completed his high school education, graduating from Tisbury High School in 1954. He then attended the New England Institute of Mortuary Science, and graduated with a license as funeral director and embalmer in 1955. After working with his father-in-law, Eugene Frieh, for the next three years as a mortician at the Martha’s Vineyard Funeral Home, he decided to make a career change, and began working as a mason with his buddy Jimmy Kerns. Around that time, he founded Island Masonry and Concrete Form Co., which for the next 40 years remained the largest masonry contracting firm on Martha’s Vineyard. Upon retiring and selling his business, he went to work at Cottle’s lumberyard. He also took up the hobby of picture framing in 1989, doing all the framing for Ray Ellis and the M.V. Striped Bass & Bluefish Derby for many years. Upon his retirement from Cottle’s lumberyard, he promptly took up a new career, driving a bus for the VTA. He retired there after 10 years. Fred simply could not sit still.

In 1979 he married the former Priscilla (Palmer) Habekost. Fred’s marriage to Priscilla came with some significant challenges — namely, eight children. Initially it was quite an adjustment, but eventually his large family became Fred’s pride and joy. He adored his children (all 10 of them), and the grandchildren and great-grandchildren that they gave him. The mere mention of his family would put an ear-to-ear smile on his face.

Fred was very civic-minded. When he returned from service in the Korean War, he participated in the State Guard in Marstons Mills with his brother Arthur Jr. He was an active member of the Legion Pumper crew for more than 20 years in Tisbury, continuing the tradition begun by the veterans of WWI. He remained deeply connected to the Tisbury Fire Department for his remaining years, and was the last surviving member of the Legionnaires for Engine 3. Fred served as commander of American Legion Post 257 for five years, and was instrumental in acquiring the Seamen’s Bethel building and moving it to its present location. He was one of the initial officers who organized the Holy Name Society at St. Augustine’s Church, and was a communicant and collector at the 8 am Sunday Mass for well over 50 years. He served two terms as selectman for the town of Tisbury, from 1969 to 1975. He served as Tisbury DPW commissioner for many years, and on the Finance Committee and as assessor for the town of Tisbury.

Fred had many hobbies and interests that included boating, hunting and fishing, scuba diving, motorcycling, sports, travel, and furniture making. He excelled at everything he did.