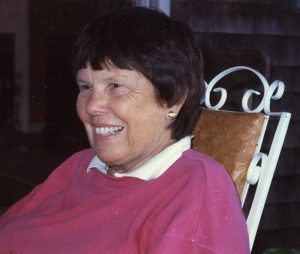 She was a graduate of Northfield School for girls in Greenfield, a school both she and her sister Janice held very fondly in their memories. Bobby later attended Skidmore College. She met her beloved husband of 63 years, Richard, while visiting her sister and fiancé at the Dartmouth College Winter Carnival. She claimed he was “a very smart guy, but so poor he didn’t even own a decent suit, but he wrote a damned good letter.” They dated, and soon were devoted.

In Richard’s junior year at Dartmouth and Bobby’s second year at Skidmore, Pearl Harbor was bombed. Richard enlisted in the Army Air Corps. He and Bobby decided to get married right before his induction. Bobby traveled with him to the various pilot training bases throughout the South until the bases were no longer open to wives. She returned to her family in Waterbury, Conn., and worked as a riveter with the millions of other women working in the war effort. She remembered the camaraderie of the defense factory fondly, and the support they gave each other.

Richard remained stateside after receiving his wings, because he had been chosen to train other bomber pilots. Bobby discovered she was pregnant with their first child by this time. The war was ending, and Richard Michael was born in July of 1945. They moved to Hanover, N.H., so that Richard could resume his last year of school on the Gl bill. After his graduation, Bobby and Richard later moved to Manchester, Conn., where Richard worked for the Hartford Courant.

Bobby was a stay-at-home mom for the early years, having two more children, Cecily Dana in 1950 and Daniel Jared in 1953. She became an active volunteer in the years that followed. She joined the Kennedy campaign in 1960, and the League of Women Voters, and became active in the local hospital auxiliary. She was a huge support of Sargent Shriver’s initiative program for child enrichment, which was later named Head Start. She helped set up one of its first classrooms in Hartford’s North End neighborhood. Bobby was an avid gardener, and later on would join the West Tisbury garden club.

In 1962 she answered an ad for a young veterinarian who was looking for a receptionist for his brand-new practice. Within a year of taking the job, she was assisting him in surgeries. He was both a small and large animal vet so this sometimes involved rural surgeries on farm animals and flock vaccinations, a job she loved.

Martha’s Vineyard had been a part of Richard’s childhood, his family renting God’s Pocket in West Tisbury for summer months off and on over the years until his family acquired the Captain Slocum House in West Tisbury during the early 1940s. Bobby fell in love with the Island, and very soon she and Richard vowed to one day retire there. They started building a summer house in the meadow sectioned off from the Slocum House in the 1970s, retiring there for good in 1980.

They had collected antiques for decades, and decided to set up an antique shop and appraisal business in 1984. Hull Antiques was located on the West Tisbury–Edgartown road in West Tisbury, and became an icon with its blue chair hanging from a tree, always with a basket of flowers under their sign. Bobby learned the silver business, and in the process made a good friend in Norma Salop of Tiahs Cove, who taught her patterns and hallmarks. Bobby knew close to 100 marks and their makers. Their business thrived in the 30 years that followed. Bobby and Richard enjoyed doing the Chilmark flea markets and the Grange Hall shows for years, and made a lot of good friends through the trade.

Bobby moved to assisted living at Atria in Falmouth in 2016 at the age of 92. Bobby was predeceased by her brother-in-law Daniel Hull, her sister Janice Hull, and her husband Richard in 2006.

She is survived by her son Michael Hull and his wife Hermine, her daughter Cecily Hull Bryant, her son Daniel Jared Hull and his partner Sue Hruby, her grandchildren

Joshua Hull Bryant and Charlotte Sanger Hull, her nephew Daniel Hull and his wife Xioshi and their daughter Sunday, her grand-niece Stephanie and husband Mike and their children Alexander and Claire, her niece Hannah Beecher and children Christopher Bump and family and Richard Bump and family, and her nephew John Beecher, his wife Dolly and family.

A private graveside service will be held at a later date. In lieu of flowers, all gifts may be sent to the Perkins School for the Blind, 175 North Beacon St., Watertown, MA 02472, or at perkins.org. Arrangements are under the care of the Chapman, Cole and Gleason Funeral Home, Edgartown Road, Oak Bluffs. Visit ccgfuneralhome.com for online guestbook and information.