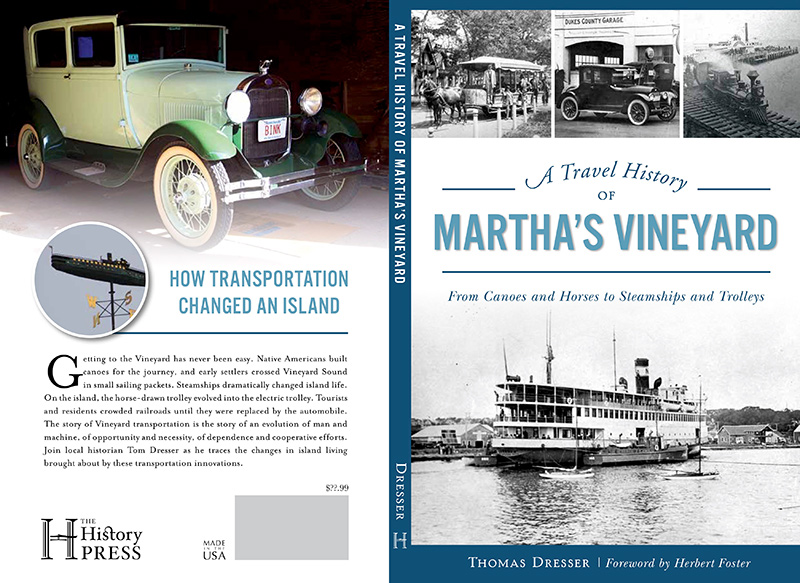 Unless you fly, the steamship figures prominently in any travel plans to our Island. Tom Dresser weaves the history of the steamship in and out of his chapters on other Island forms of transportation.

But let’s start, as Dresser does, with the Wampanoag, the Island’s first inhabitants, who have been here for some 10,000 years. Before Europeans arrived and introduced the horse and oxen, they traveled by foot on animal paths, and “explored their nautical environs as well, paddling canoes through local harbors and across Vineyard Sound to the Cape,” Dresser writes.

Skipping way ahead to the 19th century, before regular transportation across the water, packets were the only way to get to the Island, but they only sailed at a captain’s behest, so there was a need for regular service between Martha’s Vineyard, Nantucket, and the mainland. “In July 1830, the Marco Bozzair, carrying 210 who were accompanied by the Bridgewater Band, traveled from New Bedford to Martha’s Vineyard, making the first trip under steam into Edgartown Harbor,” costing the hefty sum of $2 for the 6½-hour-long trip.

Dresser delights us with many fascinating facts, too many to recount, but some about the steamships include that during the Civil War, the government paid $500 per day to charter the side-wheeler Monohansett to transport dispatches to the Union ships off the Outer Banks in North Carolina, and to move troops off Hilton Head, S.C.

Chapter 12, “Steamships 1925-1950,” might make some a bit jealous of those who took the ferries in yesteryear. We read that the Islander had, among other things, Windsor chairs, a spittoon for chewing tobacco “conveniently located,” a saloon, and smoking and card rooms. The Naushon “boasted 32 staterooms, each with hot and cold running water, and some with their own toilets.” Patrons received four-inch-long keys for staterooms, and there were writing desks with monogrammed stationery.

The Naushon earns extra fame as it, along with the New Bedford, participated in World War II, working in the British Navy traveling across the English Channel transporting troops and supplies to Normandy.

Dresser fills us in on the many modes of on-Island transportation as well, unfolding the narrative chronologically and technologically. Chapter 5, covering 1873 to 1895, greets us with the multifaceted history of the horse-drawn trolley, with its track running from the Highland Wharf at the present East Chop Beach Club to Trinity Park in the Camp Meeting Association. Its first summer in 1873, it pulled in a profit of $465 from the sale of more than 40,000 tickets. And in 1874, Ulysses S. Grant “rode a festooned car behind six horses into the Camp Ground.”

Dresser picks up the story with the electric trolley in Chapter 6, covering 1895 to 1917. The numbers tell of its success, with a single day in its first summer transporting 803 passengers. (Of course, the numbers pale in comparison to today’s VTA buses, Dresser tells us, which in July and August transport nearly a third of a million passengers per month.)

There are wonderful anecdotes about what happened when the trolleys in Vineyard Haven and Oak Bluffs each came to their side of the drawbridge, which wasn’t originally strong enough to support the trolleys. Passengers had to walk across the bridge to meet the other town’s trolley on the opposite side. I love that the Eagleston Tea House was built on the Tisbury side, meeting the “gastronomical delights of passengers who had to wait for the competing trolley.” Given the backup at the drawbridge at the peak of Island summers, it might be a good idea to reinstate such an enterprise again.

Dresser has many interesting photographs throughout his book that animate his stories. One that particularly caught my fancy is the building that is now the Big Dipper in Oak Bluffs, and was the original waiting room for the trolley in the 1900s.

Edgartown wanted a piece of the action of the tourist trade to replace their declining whaling industry, and in Chapter 7 we learn of the Martha’s Vineyard Railroad, covering 1874 to 1895. A nine-mile railroad track ran from Cottage City through downtown Edgartown and on to Katama. Amazingly, it was built in just 66 days. None too smartly though, they laid half the line on State Beach, which with every storm “buried, bent, and washed away the track as if were the weather’s special project.” When the railroad was operating successfully, it carried up to 150 passengers on a half-hour ride from one end of the route to the other, and in 1875, amounted to 28,911 fares. “But it never broke even. The seasons were too short, the costs of running a train over and from the Cottage City of America to the Nowhere of the Vineyard was just too high … [Furthermore,] in 1876, more than 300 feet of track was damaged and cost $15,000 to repair, [and] maintenance had to be performed annually.”

While we think of bicycles as ubiquitous with the summer season, they were the predecessor of the automobiles that soon multiplied on the Vineyard in the late 1880s. The proliferation of cars on the Island was entwined with the improvement of the roads. The 25-mile road that stretched from Vineyard Haven to Gay Head took four years to complete. In the early 1900s, horse-drawn wagons and cars both inhabited the roadways. After an incident in which the driver of a horse spooked by an automobile was killed, Vineyard Haven imposed a six-mile-an-hour speed limit on automobiles, which isn’t much slower than the traffic nowadays at major arteries during July and August.

The earliest flights to the Vineyard, we read in Chapter 11, were hydroplanes, with the first landing in Oak Bluffs Harbor in 1919. The two commuters were New York stockbrokers jetting here to their summer homes. And thus began the weekend aerial commuting tradition. The flight took two hours and 35 minutes, in comparison with a long day by train and ferry.

Dresser includes chapters on contemporary transportation options, which yield additional intriguing facts, but hopefully your appetite is whetted to take your own journey through his rewarding newest book.

“A Travel History of Martha’s Vineyard: From Canoes and Horses to Steamships and Trolleys” by Thomas Dresser, The History Press. Available online and at Bunch of Grapes in Vineyard Haven for $21.99, and from the author at his book talks at various locations from June through September, with dates listed at tomdresser.com.