The Martha’s Vineyard Women’s Softball League (MVWSL) kicked off its 15th season with a double-header Tuesday night at Veterans Park in Vineyard Haven.

Five teams will compete for the league championship this season, with two founding members among the missing. The four-time champion Honeys, winners in 2005, 2006, 2009 and 2012, called it a day with injuries and low numbers taking too much of a toll, while the Shady Ladies, champs in 2010, also disbanded, with several players factoring in the lineup of the newly-formed Wild Pitches.

The Pitches and Snaps opened play on Tuesday. The league newbies took a 6-4 lead into the fourth inning but Elissa Decosta, Kelly Marolf and Kathryn Townes all scored in the bottom of the sixth for the Snaps, who held on for a 7-6 win. Erin Morris had an RBI-triple for the Pitches and Kelly Marolf celebrated her birthday by slugging a home run in her first at bat for the Snaps.

In the nightcap, the defending champion Mama’s Girls, looking for a fifth title in six years, got off to a good start with an 8-4 win over the Rug Sox. Lauren Williston belted two homers, Jillian Sedlier added another round-tripper and Jenna Zechner had a pair of doubles for the Mamas, while Emily Turney had a double, a home run and three RBIs and Marisa Estrella had an RBI-single for the Sox.

The Creamers, finalists last season, had the night off.

The action continues on June 6 with the Creamers taking on the Snaps at the high school varsity field and the Wild Pitches meeting the Mamas at Veterans Park Field B (Causeway Road). Both games begin at 6:15 pm. 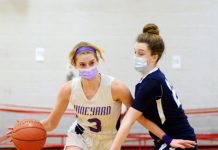