John Thomas Chirgwin died unexpectedly, but peacefully, in his home on his beloved Martha’s Vineyard on the morning of Saturday, May 25, 2019. 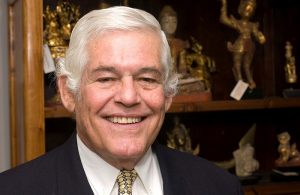 He had so many things he was looking forward to this summer. The day he died, he was planning on attending the reopening and the traditional start to the Edgartown Yacht Club season commissioning, where he had been a member since 1965. He was looking forward to attending his 60th Cornell School of Hotel Administration Alumni Reunion in early June, and seeing friends from his fraternity, Theta Delta Chi. His fall plans included a cruise with his brother Jim and his wife Margaret, whom he will be missed by, as well as his nephew Andrew and his niece Jane.

The Golden Door, the unusual retail business he created in Edgartown (and briefly on Nantucket) from 1965 to 2009 (at its many locations from Dock Street to North Summer Street) was filled with a fascinating selection of objects collected over the years, from the highly sought-after Jim Thompson Thai Silk bikinis in the ’60s and ’70s to the more extensive recent collection of African tribal art. The store was ably assisted over the years by a fabulous staff of what for many summers came to be known as the “Golden Girls,” among them Sherri, Tuna, Lucy, Mimi, Peggy, Cynthia, Susan, Debbie, Jennifer, Robin, Susie, Marjorie, Laura, Thea, and many more.

Sadly, his dear friends on the Vineyard will now also be deprived of hearing the latest tales of his travels and art acquisitions from the far corners of Asia and Africa, not to mention missing the extraordinary yarns he weaved, from his meeting heavyweight champion Rocky Marciano in the nightclubs of Fidel Castro’s Cuba, the wild festivities of many a time spent at Carnival in Rio with his friend Jeff, to the joy of the idyllic retreats he indulged in on the beaches of Bali. Many of his Vineyard friends could tell tales from the times they visited him abroad, enjoying activities like boating on the Khlongs of Bangkok, trekking through the temples of Cambodia, or dancing the night away at the clubs in Hong Kong. His debonair presence at every prominent Vineyard summer party, decked out always in a different colorful ensemble, or a natty double-breasted blue blazer, will also be missed.

Across the ocean in Bangkok, a place that had been a second home for many years, a fraternity of brothers known fondly as the “Bachelors of Bangkok” (John, Niphon, Davis, Shrimp, Ed, Kurt) and friends at Bangkok Rotary who shared many an adventure, among other things, will hold true to absconding from recanting those stories inadmissible to the general public. He will be most sorely missed by friends across the U.S., especially John Williams, who saved his life over two years ago after a heart attack, which spurred his quest to increase his travel schedule to ensure there was not a country, town, or adventure to be missed.

He came from three generations of Martha’s Vineyard innkeepers on his paternal side, starting with great-grandfather and -grandmother Thomas and Anne Cleveland Chirgwin (owners of the former Edgartown Inn and the Colonial Inn), grandparents Thomas and Lisa Shute Chirgwin (also at the Colonial Inn), and lastly his beloved parents Fred and Lucille Hoyt Chirgwin, owners of the former Daggett House. This legacy will be carried on by his daughter Melissa Chirgwin Thorkilsen, her husband Eric and their sons, Christopher and Nicholas, and Eric’s daughter Erin, as they will continue to keep the Lightkeepers Inn running, with the strong hand and huge heart of Heidi Raihofer and her husband Joe, who have been assisting John for 30 years in this and most aspects of his singular and varied existence. His was a bucket-list life filled with exotic places, wild escapades, friendships across the world, epicurean delights, and curiosity satiated. We are all richer for having known him.

A celebration of life will take place on August 23 at 1 pm at the Federated Church in Edgartown. All are welcome.