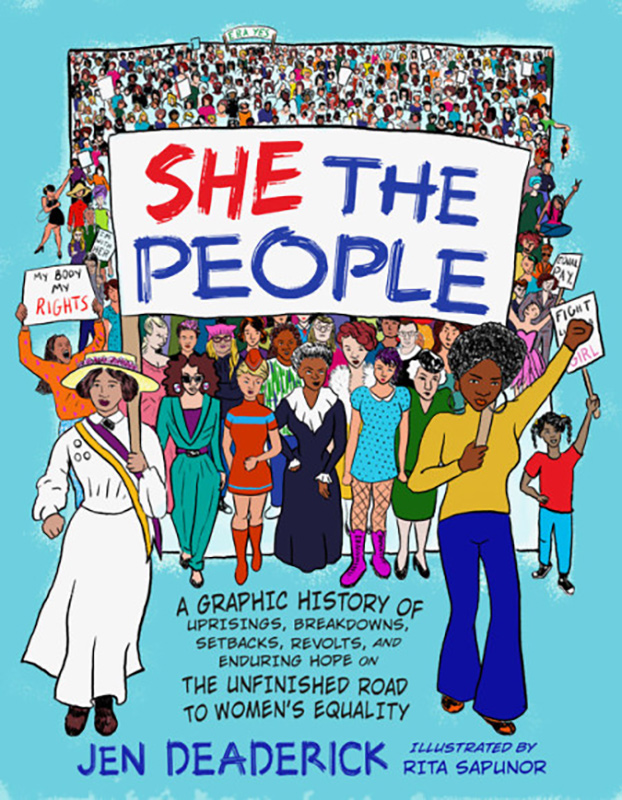 It’s hard to decide where to begin discussing Jen Deaderick’s fascinating, thoroughly accessible, and compelling book, “She the People.” That’s not the entire title, the rest of it is long — something that editors don’t typically want. But for this book, it’s absolutely necessary in order to get a handle on the delicious political and social story: “A Graphic History of Uprisings, Breakdowns, Setbacks, Revolts, and Enduring Hope on the Unfinished Road to Women’s Equality.”

The book is a comprehensive history of the complex evolution of the rights of women of all colors and backgrounds in this country. Deaderick deftly situates the story within the larger social and cultural context so that the book is one of American political history, which has women’s influence and rights as a through-line propelling us through the journey.

Least you think the book is just about the battle for the Equal Rights Amendment, Deaderick addresses much more, starting back with the Thirteenth, Fourteenth, and Fifteenth Amendments. In Chapter Two, she writes, “Unfortunately, the Fourteenth Amendment went on to specify that one right in particular, the right to vote, was guaranteed only to ‘male citizens.’ This was a direct reaction to the recently begun women’s suffrage movement, and pushed it a huge step backward. Before the ‘male citizens’ clause, no mention of gender or sex was made in the Constitution, leaving its interpretation open when questions on those topics reached the courts … [B]ut the ‘male citizens’ clause officially codified the second-class nature of women’s citizenship.”

In Chapter 8, covering the glory years for the Equal Rights Amendment, Deaderick rightly includes another landmark, the Supreme Court ruling fully legalizing abortion. And since the major discussion about the ERA shows up in Chapter 8 and the book has 12 chapters, there is clearly more to the story of women’s rights. At first, she reflects the gleeful tenor of the times when the ERA passes the House and Senate by huge margins, but warns us that the journey isn’t over. The amendment needed approval by 38 states to be fully ratified. She writes: “How could it be a problem? Look at how excited everyone was! We were golden, right? Get yourself a soothing beverage before turning to the next chapter.”

Moving forward, the story for women’s rights takes a turn for the worse. She leads us through the political quagmire that laid the deathtrap for the eventual defeat of the ERA, and lets us know that it wasn’t just men who led to its demise, but the fracturing among women’s groups with different ideologies as well.

One of the key ingredients of “She the People” is Deaderick’s contextual approach that includes the role of black women from abolition through the Civil Rights movement and beyond. For example, in Chapter 6 “You Don’t Own Me,” covering 1960-1964, she writes of Pauli Murray, who at a National Council of Negro Women’s meeting: “gave a talk in which she urged her colleagues to action: ‘The Negro woman can no longer postpone or subordinate the fight against discrimination because of sex to the civil rights struggle, but must carry on both fights simultaneously.’ Copies of the talk circulated among black women for years after as a stirring feminist call to arms.”

Likewise, in Chapter 10, “Men Don’t Protect You Anymore,” covering 1980-1991 the Reagan era, Deaderick ranges from the political realm of Nancy Reagan, Sandra Day O’Connor, and a major opponent of the ERA, Phyllis Schlafly, to the empires of powerful women commanding their own image such as Oprah Winfrey and Martha Stewart. And in Chapter 12, “This Is What a Feminist Looks Like,” covering 2009 to today, Deaderick talks of other significant women, including Supreme Court justices Elena Kagan, Sonia Sotomayor, and Ruth Bader Ginsburg, as well as the three women who founded Black Lives Matter — Alicia Garza, Patrisse Cullors, and Opal Tometi.

Another important aspect of Deaderick’s book that makes it enjoyable is her witty, sometimes cheeky tone. The visual layout of the book complements Deaderick’s unpretentious and sometimes droll writing style. We have the illustrator Rita Sapunor’s spot-on black-and-white linear graphics, a casual-looking bold font that offsets the names of the people being spoken of, and visually distinctive call-outs that immediately orient us to the surrounding text.

Ultimately though, what’s most important is Deaderick’s message — one of women’s perseverance. She ends her book on an up note, leaving us with her final comment about the 2018 midterm elections:

“Voter suppression laws that had sprung up in the wake of the Supreme Court’s gutting of the Voting Rights Acts were challenged, and the votes kept getting counted. Even better, total voter turnout had been the highest in fifty years.

The Public Sphere has been busted open. Using our imperfect democracy, we the people will keep working toward that more perfect union.”

“She the People,” by Jen Deaderick and illustrated by Rita Sapunor. Seal Press, New York. Available online and at Bunch of Grapes in Vineyard Haven.