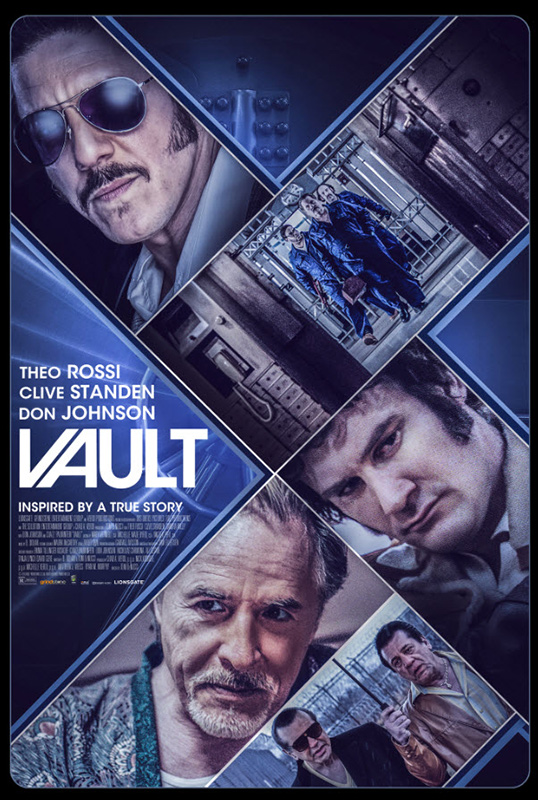 A Rhode Island–based mafia crime story, “The Vault,” will play Saturday, June 15, at the M.V. Film Center. Based on real-life events in 1975, it’s producer and Edgartown resident Chad Verdi’s latest project. Directed by Rhode Island native Tom DeNucci, the film stars Chazz Palminteri, Don Johnson, and Emmy winner Samira Wiley. Verdi, his wife and co-producer Michelle Verdi, and DeNucci will participate in a Q and A post-screening session, along with editor Zaren Shai.

In an interview last weekend, Verdi talked about what led him to a film about what was, back then, the biggest heist in American history. One of his previous biographical films, “Bleed for This,” came about after a boxer friend broke his neck. Verdi began researching a second real-life film on the Rhode Island mafia. That research led to uncovering the story of the vault heist. “I love a true story,” Verdi said. In post-production is “The Irishman,” with Robert DeNiro and Al Pacino, directed by Verdi’s friend Martin Scorsese. After 20 years visiting the Vineyard, Verdi and his wife moved to Edgartown last November.

Anyone who follows true crime stories will recognize the name of the late Raymond Patriarca, who headed the New England mob for 30 years. In “The Vault” he’s played by Palminteri, the Best Supporting Actor Oscar nominee for “Bullets Over Broadway” (1994). One of Patriarca’s gangster underlings, Gerry Ouimette, is played by Johnson, who built his career as Detective James Crockett on the TV classic, “Miami Vice” (1984-1990).

Samira Wiley of “Orange Is the New Black” and “The Handmaid’s Tale” takes on the one major female role of Karyn Sponheim. Karyn is the girlfriend of heist principal Deuce played by Theo Rossi, and Chucky, played by Clive Standan, is Deuce’s best friend and partner in crime.

The film opens with black-and-white archival footage of the real crooks. Then Gerry discovers a fur company that advertises itself as having a “Bonded Vault” that houses bundles of mafia cash. Enlisting Deuce and Chucky, the three hatch a plan to rob the place with five cohorts. They pull it off, grabbing $32 million, but then the trouble begins. Going into hiding, the robbers wait to receive their share of the loot. In the background on TV are shots of Richard Nixon insisting “I am not a crook.”

All the characters move in and out of prison, including Patriarca, who still manages to run the crime syndicate while he’s locked up. Touches of humor include the robbers calling each other “Buddy” followed by the Rhode Island town they’re from. Once the vault robbery gets underway, the Buddys drape flowered pillow cases over their victims’ heads. The big question becomes: Where has the money gone? Gerry stonewalls Chucky’s desperate phone calls, and members of the heist gang start getting bumped off, one by one.

At the opening of “The Vault” last Friday in Rhode Island, Verdi said the one living member of the famous heist attended, and he loved the film.

Information and tickets for “The Heist” and other Film Center, Capawock, and Strand theater screenings, go to mvfilmsociety.com.