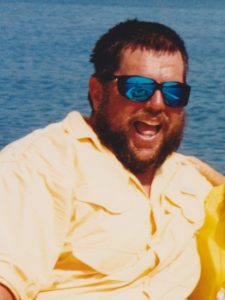 Thor’s quick wit and amazing wisdom were always present during his unique and challenging life. He served in the Air Force for 10 years, based in South Korea, translating documents for the NSA. He returned to the U.S. and applied his passion for computer programming and technology in several positions, including teaching graduate students at Boston University and working as a freelance consultant in IT.

Thor’s love of fishing and Martha’s Vineyard drew him to settle on the Island in the late 1990s. He managed to work remotely and in flexible ways, giving himself the ability to pursue his interests in fishing, piloting his Cessna 182, riding his Harley with a sidecar, and spending time with family and friends around gourmet meals and exotic drinks. Many were lucky enough to avoid his fiery hot crayfish parties, yet enjoyed his blackened swordfish and famous pig roasts. Thor could create out-of-this-world delicious culinary experiences.

As his nieces and nephews grew, Uncle 4 would perform as a magician at their birthday parties, teach them astronomy, take them on fishing adventures, and shower them with the most unusual and fantastic gifts. Incomparable to other uncles, Thor was the smartest, most fun, and larger-than-life character with a deep belly laugh. He loved them all unconditionally.

Thor touched many people in a myriad of ways. Most saw the good in Thor, and valued his generosity and sharing of knowledge and intelligence. Thor truly loved the Edgartown Yacht Club, volunteering during regattas, helping the club with computer systems, and serving on the race committee, as well as fishing local waters. Spending the end of the day at Bar One or the String Piece gave Thor great pleasure. He will be remembered as a salty, colorful, and eccentric character with a heart of gold.

He leaves behind his mother, Gail Farrish of Edgartown, and her friend of many years, Warren Morse. Thor was predeceased by his father, Grover Farrish. He also leaves behind two sisters, Kristin Shaw and her husband Tiger, of Park City, Utah, and Heidi Laub and her husband George, of New Canaan, Conn. Thor loved and enjoyed so much his seven nieces and nephews, Gunnar, Kara, and Eva Shaw, and Nick, Kristin, Andrew, and Elizabeth Laub. They fondly referred to Thor as “Uncle 4,” a nickname that Thor gave himself during their youth.

A celebration of his life is being planned for later this summer.